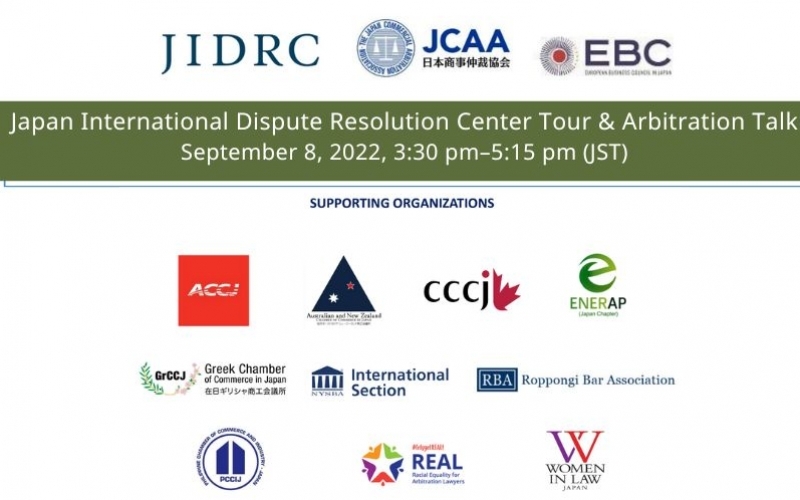 On September 8th, CCCJ members were invited to join this special hybrid event hosted by The Japan International Dispute Resolution Center (JIDRC), Japan Commercial Arbitration Association (JCAA), and European Business Council in Japan (EBC). Starting with an on-site/virtual tour of the JIDRC’s facilities, representatives from these organizations gave an informative presentation on International arbitrations in Japan.

To begin with, Junya Naito, the Chair of the Advisory Board at JIDRC, and Akiko Yamakawa, the Public Relations Officer at JCAA, focused on why Japanese individuals and corporations should utilize arbitration as an alternative form to court systems in resolving disputes. They emphasized that choosing arbitration has more flexibility than litigation due to the selection of place, institution and language of arbitration and thus it is convenient especially for cross border transactions. Since arbitration is a one-time game whereas courts have 3 different litigation systems, it takes less time to proceed and is also cost effective compared to courts. In addition, while Japanese courts do not have a set timetable in their process, arbitration has a procedure timetable and therefore it is easier to schedule ahead of time for both parties.

Miriam Rose Ivan L. Pereira, the Public Relations Officer at JCAA, talked about the advantage of Interactive Arbitration Rules, which are aimed at offering maximum predictability and efficiency of arbitrations by adopting a more "civil law approach".  Some of the points that were made included the clarification of parties' positions and identification of key disputed issues, communication of preliminary views and fixed remuneration of arbitrators.

During the Q & A session, a question was asked about who and on what occasion people can use the facilities at JCAA. Tony Andrioti, the moderator of the event and the Professional Institutional Relations Officer at JCAA, answered that it is for general use at present and the facilities can be used for arbitration, mediation and any business negotiation. He also added that the availability of seats can be easily checked online.

Yoshihisa Hayakawa, the Executive Director and Secretary General at JIDRC, mentioned that many people naturally think of going to court when it comes to dispute resolution, not knowing the advantages of arbitration. In making arbitration more appealing in Japan, there is now a government effort to provide more budgets and support systems for International arbitrations.

Mrs. Yamakawa mentioned that JCAA tells you everything you need to know including procedures, timelines, etc. and that the average cost of arbitration is 50 million dollars (5,000万円）, which is relatively low compared to courts. She summarized that if an individual does not have any experience in courts, it is better to choose JCAA for smooth and flexible arbitration. These efforts including the state-of-the-art location at JCAA are helping arbitration become more popular in Japan.