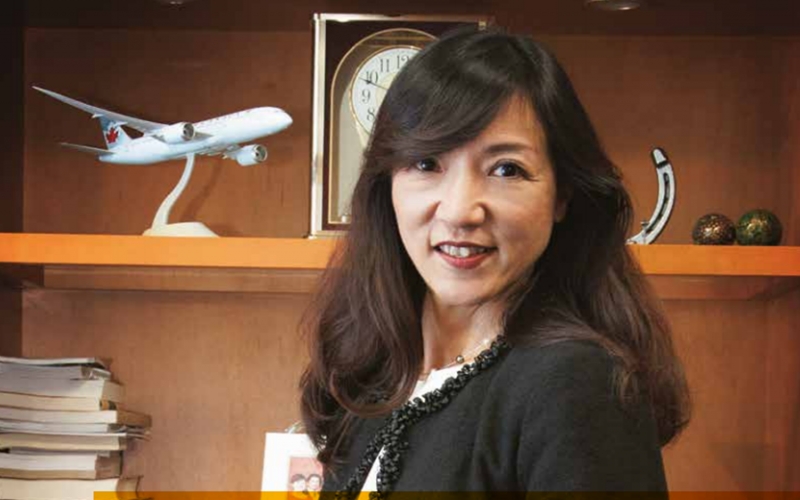 For Kiyo Weiss, mother and general manager at Air Canada Japan, connecting people around the globe is as much about embodying a positive attitude as it is about forging ties. Born to a traditional Japanese family in Ashiya, near Kobe, and raised in Tokyo, Weiss says her father first sparked her interest in foreign cultures. “As an engineer and executive vice-president of Kobe Steel, he travelled frequently and always brought back interesting stories about foreign countries,” she recalls.

Her father, she says, was “a typical Japanese corporate warrior,” whereas her mother almost never worked. “My mother was concerned enough to enroll me in an afterschool program when I was eight so I could learn English and increase my chances of landing a good job.”

WORKING AROUND THE STATUS QUO
Fresh out of university, she began work as a sales assistant in the chemical department at Mitsui & Co. Ltd. At the time, career options for female graduates were few. “I was assisting male sales executives who sold chemical products. I still don’t know what they were used for,” she says, adding that joining a prestigious company like Mitsui was the best thing a female university graduate could do. However, soon after she joined the labour force she began to notice more and more women were taking on interesting work and developing global networks. “It appeared far more interesting than what I was doing at Mitsui. I wanted to learn more and gain more skills, so I started to look for better opportunities.”

Back then, women who applied for work at a traditional Japanese company typically ended up in ippanshoku (general office work) jobs, as most sougoushoku (career track) positions were reserved for men. “I think we had it bad,” says Weiss. “When you want to do the same kind of work as men but the company wants you to do other things—like basic clerical work and keeping books—you can’t really say so much. At least nowadays women have a choice. I think it’s a big improvement.” Unhappy about her job situation, she left the company after just over a year of service and found work with a British one that “did not underestimate women.” “From the beginning I was given my own office with a door—I was only 25 or something. It was nice; I started to truly enjoy what I was doing.”

CLIMBING UP THE ECHELONS
Nonetheless, she felt she wanted to move to a bigger organization. “I always had aspirations of becoming a global person,” she confides. One day, she saw an ad in the The Japan Times for a sales representative at United Airlines and applied for it. “There must have been around 1,000 candidates at the time,” says Weiss. Despite the large-scale selection process, she landed the job.

She quickly rose up the corporate ladder. She was first promoted to sales training manager, then to manager in the reservation and ticket office where she had 120 union members under her supervision. “I was the youngest female manager of that size department at United.” Weiss made it as far as district sales manager. She coveted the company’s top position, though her chances of getting there, she says, were slim. Her big opportunity came when Air Canada, looking for a sales and marketing manager, offered her the position. “The recruiter contacted me and I decided to move because at United my boss was an expat—there were quite a few of them in the company—and I saw a glass ceiling there; I didn’t think I was going to get any higher within the company.”

The head of sales and marketing position at Air Canada Japan—number two in the company—was very attractive and she accepted the job. Accustomed to a more rigid corporate culture, Weiss says she was surprised to see how much more amenable the company was to its staff. “As a Japanese woman in a foreign company, I was actually able to influence headquarters through my opinions and perspectives.”

Then, two years ago, she became the airline’s general manager. “I was always curious, passionate and forward-looking,” she says, noting that women often miss out on getting a promotion as they are generally less keen on taking higher-ranked jobs. She concedes having a supportive partner is crucial. “My husband helped me a lot. That’s why I am able to do what I am doing.”

AN AMBASSADOR OF CHANGE
As Air Canada’s representative in Japan, she regularly attends CCCJ events. The airline, which has been a corporate sustaining member since 1975, is an important sponsor of many events, notably, the Maple Leaf Gala. “I think there are more ways to work together,” Weiss remarks, possibly hinting at increased cooperation with the CCCJ.

Weiss is also highly dedicated to advancing female causes in Japan. “I want to influence women by presenting myself as a very positive, outgoing and energetic person,” she says. “I want all women to be positive, [a key] to succeeding in this world.” She also wishes to have “a very good dialogue” with men and Japanese companies about the current work conditions and how these need to be changed. “It’s easy to say that thirty per cent of big companies’ board members need to be women in the future, but our current work culture needs to change, and companies need to lead these changes.”