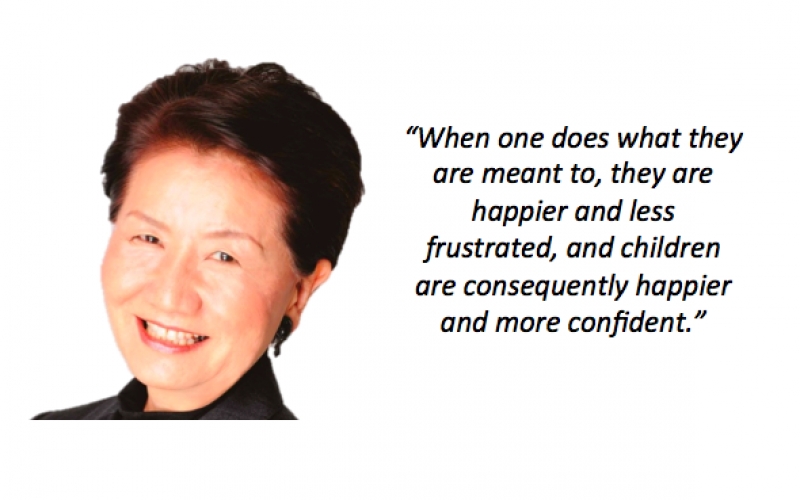 BEING A STAY-AT-HOME MOM WASN’T EXACTLY THE KIND OF FUTURE AKIKO KOSUDA ENVISIONED FOR HERSELF..

Like many women, she wanted to pursue a fulfilling career.

“I found housekeeping boring. And, while taking care of my child was wonderful, I wanted to find something else to influence and change the world; I was ambitious,” Akiko Kosuda confides.

Her first job fresh out of university was with British Airways’ customer service department. After three years of dedicated work, she moved to the sales department where the majority of travel agents were men—women were blocked from obtaining those kinds of positions. She did, however, lay the groundwork for future generations: “I was the first female to become sales manager at the time,” she says. “In Japan, airlines were a man’s world.”

She had her first child—a baby girl—while still working for British Airways. “I had to go back to work within eight months following her birth.” In those days, nurseries and kindergartens were scarce, so she had to resort to niju hoiku (double daycare facilities) to care for her daughter. “The nursery school ended around 6 p.m., but I finished work around 8 or 9 p.m. So I had to hire a nanny to pick up my daughter and take her home,” she explains. While she spent more than half her salary on babysitting, Kosuda says the money she’s invested in childcare was well worth it. “I got it back 100 times. It was an investment for my future and my career.”

For Kosuda, it’s the quality, not the quantity, of time spent with one’s children that’s important. “Every weekend and holiday was dedicated to spending quality time with my daughter,” she says. “I focused on her and showered her with love, and she responded back to me.”

When her daughter was in high school, Kosuda took a few months sabbatical between jobs to spend more time with her. “She didn’t like me being around the house too much,” Kosuda recalls, “because she was used to having her independence. She even wrote me a letter to tell me I was failing to recognize her independence,” she laughs. “So I eventually kept a very comfortable distance between us.”

There are conflicting opinions about the psychological impact that being raised by strangers may have on children, but Kosuda is confident that her life choices haven’t affected her daughter negatively. On the contrary, she believes she was a good influence. “When she was six or seven years old, I discussed the ‘business mother’ with her,” she says. “I asked for her opinion, I influenced her. I shared a lot because I treated her as another adult.”

Despite the difficulty juggling job and family, Kosuda says she wouldn’t have done anything differently. “I would have been worried had my daughter not wanted to pursue a career of her own. I didn’t want her to become a shufu (housewife); that’s not the kind of model I wished to be for her.”

As a working mother, Kosuda certainly helped shape her daughter’s future; achieving work-life balance, however, proved to be more challenging. “I was a very bad example because I sacrificed mysleeping hours,” she says. When she returned home from work, she would have dinner with her family and then play with her daughter until about 11 p.m. After putting her to bed, she would stay up until 2 or 3 a.m. to work. “Maybe I was lucky because I had physical toughness. My husband was also very supportive. He encouraged me to pursue my own career.”

As a seasoned coach, advisor and parent, her advice to young, career-minded mothers is to be a strong role model and “show your confidence and happiness to your kids.” She offers: “Senaka wo mite sodatsu (show your back to your kids),” meaning children learn by imitating their parents. She believes that if a woman is focused on her profession, she should not feel guilty about pursuing her dreams. “When one does what they are meant to, they are happier and less frustrated, and children are consequently happier and more confident.”

“Dynamite Kosuda,” as cccj Executive Director Andrew Lambert fondly calls her, never misses an opportunity to reach out to others. Now that her daughter is grown-up, she’s turned to coaching as a way to inspire others to follow in her footsteps. Still very active within the business community, she sits on various boards and committees, notably as senior advisor for the Japan pfi/ppp Association and executive coach and business development advisor for Coach A, one of the world’s largest executive coaching firms. As the Tokyo Girls Collection executive committee supervisor, Kosuda helped organize the Nara Music Fest 2015 edition of Takenoko!!! Meets Kashihara Shrine which drew over 5,000 people.

In 2013, she joined the cccj Honorary Board of Advisors, making it her personal mission to advance the gender diversity cause, leading such initiatives as the Women’s Leadership Program and, more recently, the Gender Diversity Roundtable Series. Her insatiable desire to further herself and to inspire others to do the same is undoubtedly reflected in the energy and serenity she exudes. “I am very happy,” she says, “and it’s not the end: I am still investing in myself.”

When one does what they are meant to, they are happier and less frustrated, and children are consequently happier and more confident.