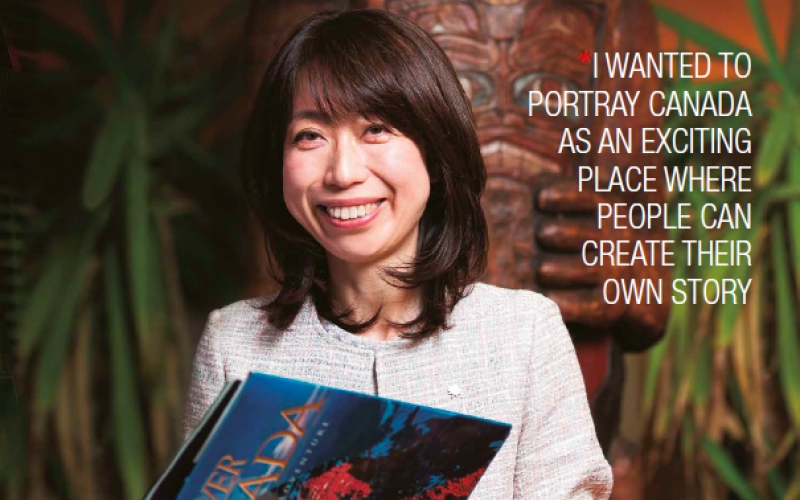 Destination Canada, the organization formerly known as the Canadian Tourism Commission, has recently embarked on a bold new marketing strategy. Its innovative three-year, multi-tiered content promotional campaign to inspire “high-yield” Japanese travellers to visit Canada is nothing short of a tourism sector masterstroke.

Developed in concert with Imagica BS, NHK, BS Fuji and other media partners, the Canada Theatre project aims to celebrate Canada in the lead up to to the country’s landmark birthday celebrations in 2017. “We wanted to do something special to mark Canada’s 150th birthday and engage potential Japanese travellers,” explains Masayo Hando, managing director of Destination Canada’s Japan office. “So, we discussed our options with our media partners, whose producers and editors are well acquainted with Canada. After much brainstorming, internally and externally, we created the Canada Theatre program.”

“The website,” says Hando, “is a good tool for existing Japanese fans of Canada, while the drama and other social media content help to reach a new audience that may not initially have been interested in Canada, but who will hopefully become more inclined to travel there in time.”

Out of the five things the Japanese look for in overseas travel (according to statistics from Destination Canada’s “Global Tourism Watch” reports), national parks and cities that are in close proximity to nature are most popular for Canada. “However, Canada must showcase historic, cultural and culinary experiences as these are also strong motivators for Japanese customers. Mosaic Canada was developed in response to these travel trends,” says Hando.

A recent shift in demographics indicates that 75 per cent of Japanese travellers to Canada are under the age of 55. “We now have younger customers and they are looking for more active experiences,” says Hando.

One of Canada Theatre’s main objectives is to encourage Japanese tour operators to develop new products to meet those needs. A change in mindset, however, was necessary. Hando explains: “At first, some tour operators were reluctant to take this step, preferring to stick with traditional packages, mostly geared toward an older clientele. Since our website combines media content with travel packages, tour operators eventually opened up to the idea. They felt they didn’t have to take any extra risks in promoting these products.”

FICTIONAL REALITY
More than a mere promotional tool, Mosaic Canada cleverly fuses fact and fiction, appealing to viewers’ emotional core values. “One thing we wanted to do was to have both the reality and the drama of the story moving together,” says Hando. The idea, however, necessitated much negotiation. “The Japanese broadcaster wanted to focus on Nana’s personal journey, but we really wanted to feature Canada, so there were a few bumps in the road.”

The series, which revolves around three main characters, was inspired by the lives of the Destination Canada Japan team—all of whom were women. At the time, the head of the office was a woman of Japanese descent. “The character of Emily Kurashina was largely inspired by Maureen Riley, our former managing director,” says Hando. “Through Emily, some characteristics of a Canadian business environment and attitudes can be seen, in contrast to the more traditional tendencies of Nana and her Japanese colleagues.”

Akin to a bildungsroman, the Mosaic Canada story follows Nana through her formative journey across Canada. As she travels, her character evolves—not merely in the drama, but in real life as well. “Nana’s attitude at first is simply to take in what Canadian people have to say,” Hando explains. “Until episode six, the actress was only We now have younger customers and they’re looking for more active experiences” The Canadian / 015 given the script to recite, but now she’s getting further involved in the production process and asking her own questions as her English improves. In order to achieve this, we decided to do workshops at the Destination Canada office and brainstorm together how we wanted to build the storyline. She could possibly become a real member of the Destination Canada team.”

For Saki Yasuda, the Japanese actress from Fukushima Prefecture playing the lead role—her first—each episode has helped refine her acting skills. “In the beginning, Nana was just like me,” she says. “So it was  acting, but then again, not really. I feel I’m getting better and better now, though.”

LAUNCH CHALLENGES
Originally, the producer’s idea was for the series launch to coincide with the opening of the Canadian Museum for Human Rights in Winnipeg, Manitoba in 2014.

The first episode, which serves as theprologue, was partly filmed in Winnipeg during the GoMedia Canada event, Destination Canada’s annual inbound marketplace. Colleagues from the Destination Canada head office in Vancouver were asked to take part in the filming. “Our chief marketing officer even had a walk-on part in it,” says Hando. Filming the drama during a real event, however, proved to be challenging since the crew weren’t allowed to disturb meetings and disrupt the marketplace.

Revisiting the old East-versus-West paradigm, the debut episode taps into differences between Canadian and Japanese people and culture. Viewers are introduced to a diligent—if uncompromising—Nana, who initially appears reluctant to travel to Canada for business. With a word of encouragement from her boss and a piece of Nanaimo bar for comfort food, she flies to Winnipeg to attend GoMedia and present Destination Canada’s marketing plan for Canada’s 150th birthday celebrations.

REEL LIFE
Carefully filmed to reflect Canadian multiculturalism, lifestyle, culture, values and history; each Mosaic Canada episode features a different theme linked to Canada Theatre’s unique
selling propositions. The docudrama even goes a step further, engaging the public in global issues with a host of sub-themes that set the tone for the entire series.

“We wanted to feature Canadian values,” says Hando. “And so it made sense to include topics like sustainability and diversity, for instance.”

In episodes two and three, “Walking” and “Living with Nature,” Nana learns about Canada’s efforts to promote sustainability and preserve the environment for future generations. Later, in episodes four and five, she gets a taste of Canadian hospitality, sampling multi-ethnic regional foods grown atop urban rooftop gardens or on local organic farms, and embarking on friendly adventures and historical quests.

Nana also experiences first-hand the “relaxed” Canadian lifestyle, as she walks or cycles through cities or quietly paddles on the ocean. In Vancouver, her kayaking guide even offers his own bit of wisdom on how best to clear one’s mind, likening kayaking to walking.

In a recent interview, Yasuda recounted a similar experience canoeing on the Yukon River while filming episode five: “As I paddled, I wasn’t actually thinking of anything. I was just open to the nature all around me, letting the river flow through me. No worries, no thoughts in my mind. That surprised me a lot.”

This, Hando remarks, is a clear sign that Canadian lifestyle values are starting to “rub off on her.”

SPIRITED STORIES
Destination Canada’s slogan, “Canada, Keep Exploring,” is not only about discovering new places, it’s about discovering oneself. “I wanted to portray Canada as an exciting place where people can create their own story, says Hando. “In Japan, we have a kind of model or social decorum that dictates how we should behave. When I was in Canada, after only a couple days, I felt much more relaxed. I didn’t have to worry about anything because others were totally fine with me being me.”

The stories of two Japanese expats in episode two epitomize this.

Kawakami, an ex-salary man who turned to making guitars after moving to Canada, says he likes the “Canadian spirit” that promotes acceptance and respect of others regardless of their backgrounds. Chef and restaurant owner Tojo explains how Canada inspired him to express himself freely through his culinary art.

For lead actress Yasuda, the Mosaic Canada project was an eye-opener. Having moved to Tokyo from Fukushima, she says she was scared to go out or meet anyone. “I lived in a box. There were so many things I hadn’t tried or couldn’t do—like riding a bicycle, paddling or skiing. I didn’t challenge myself. Looking back, I think I was very selfish and closed off. Now I am more generous and open-minded and I want to listen to others and be more interested in them. I’ve changed a lot.”

Hando echoes that: “Changing one’s perspective can be a real discovery for Japanese people. I hope the audience can be inspired to change, too.”

ANNIVERSARY PRESENT
Scheduled to be aired just before Canada Day in 2017, the last episode of the series will be a fictional wrap-up commemorating Canada’s 150th anniversary. “Beans Co. are launching a Canadian experiential theme park in Toyosu, adjacent to the new fish market” in Tokyo’s portlands, says Hando. “The people behind it are hoping to have the grand opening on Canada Day this year, though autumn may be more realistic.”

The Mosaic Canada crew and the Canada theme park team will collaborate on some of the promotional events. “Maybe Nana is planning the program to help mark Canada’s anniversary and introduce the theme park,” Hando hints. Regardless, the park will be featured in the epilogue—with real media events as part of it, much like a bookend to the first episode of the series.

At the time of this interview, the crew was in Canada filming episodes six and seven, which are set to take place in Quebec, Ottawa and the Northwest Territories. The featured themes—arts and culture, history and transportation—will revolve around a traditional spring sugar shack brunch, Quebec’s winter carnival and its mascot Bonhomme, the Group of Seven, and travelling via bush plane, dog sled and snowmobile among other things.

Can you tell us about the casting process?
Saki Yasuda: I heard about the audition through my management company. I was very much interested
in it because I’d never been abroad and all I knew about Canada was stuff like maple syrup and Niagara
Falls. My manager told me there were 300 candidates auditioning. In addition to the usual audtion
process, we were asked to do a presentation about Canada. Masayo Hando, who sat on the casting panel,
was impressed with my presentation.

Mosaic Canada producer: We were looking for an actress who could have fun and work and grow together with us. We found Yasuda-san had the greatest potential. She had never been in a drama before; that’s why we chose her for Nana’s role.

What was it like filming the series in Canada?
SY: At first, everything was new and interesting. Canadians are kind, accepting and welcoming. They were always willing to show me everything. I met a lot of people. I became good friends with Jon, the Destination Canada chief marketing officer.

How do you feel about Canada now that you’re an expert?
SY: I feel that I am “a beginner’s expert.” I learned a lot about Canada mostly through the many people I met and experienced different aspects of its cultures. I wanted to share my discoveries with the audience and inspire people to travel to Canada.

What’s on the horizon for you career-wise?
SY: I’m currently working on several new projects such as reporting and commercials, but my main goal is to become a better actress. So, right now, I want to focus on Mosaic Canada and do my best until the last episode. I want to show a completely different Nana—a Nana who’s grown and changed. I also want to learn more about Canada as a country and meet more Canadians. I want to share my love of Canada with the audience and inspire them to visit. I saw how Canadians enjoy their lives and I want to enjoy mine—and smile like Canadians, who make others smile.