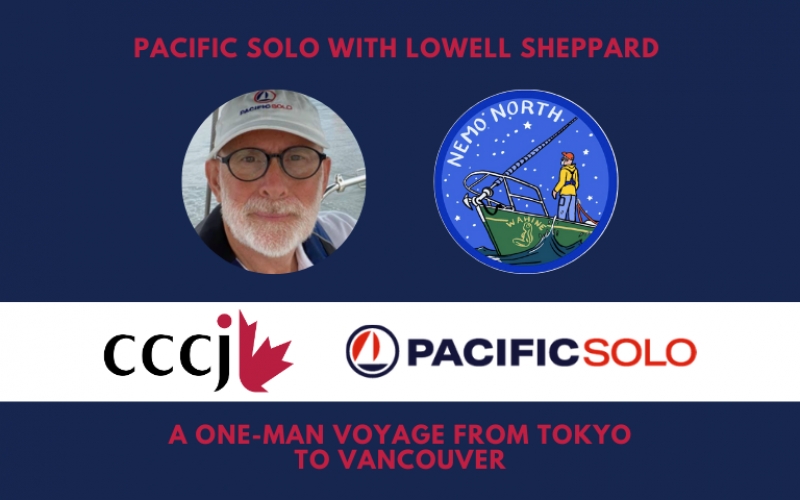 Lowell Sheppard is a social entrepreneur and CCCJ member who on Nov. 19th shared with us the details of his latest endeavour, sailing solo across the Pacific.

At age 64, he was looking for a breathtaking challenge, and he decided that he wanted to sail alone from Tokyo to Vancouver. In 2019, he bought a boat and he is now preparing for a 2-3 month journey that will begin in May 2021, weather permitting. At the time, he was a novice sailor, and has spent much of the last 18 months learning more about sailing. Part of his goal is to bringing attention to the plight of our oceans and the trip will pass through the Great Pacific Garbage Patch. This means taking a route that is not the shortest route, or the warmest route, so the journey must take place in early summer, before typhoon season starts. This is approximately a 6-week window.

His sailboat is a Gib Sea 404 40ft. sailboat and he is currently working on outfitting it with solar power. Several other additions and upgrades have already been made including a hydrovane, which is used for steering. Other than the boat itself, a steering mechanism is another tool that sailors often give a name. This one is called Skylie, after Lowell's border collie. Electronics tools will help avoid collisions with boats or whales at sea. Even the mattress on the sailboat is unique; it's a type normally used on the space station and was provided by one of his sponsors.

In addition to the right tools, Lowell has set up a team of advisors to help him prior to and during his trip. He has worked with mechanical engineers, meterologists, strategic planners and health counselors to prepare himself. Daily rituals like checking the weather and sending emails will help to pass the time.  He is in the final phase of recruiting corporate sponsors who will be featured in YouTube episodes, signage on the boat and some TV interviews. If you are interested in being a sponsor, please contact lowell at lowell [at] navigate22.com. Also, individuals can sponsor with one off sponsorships by becoming a patron (more information at www.patreon.com/pacificsolo). Individulas can also buy from his online store (powered by Shopify) and subscribe to the Pacific Solo YouTube Channel.