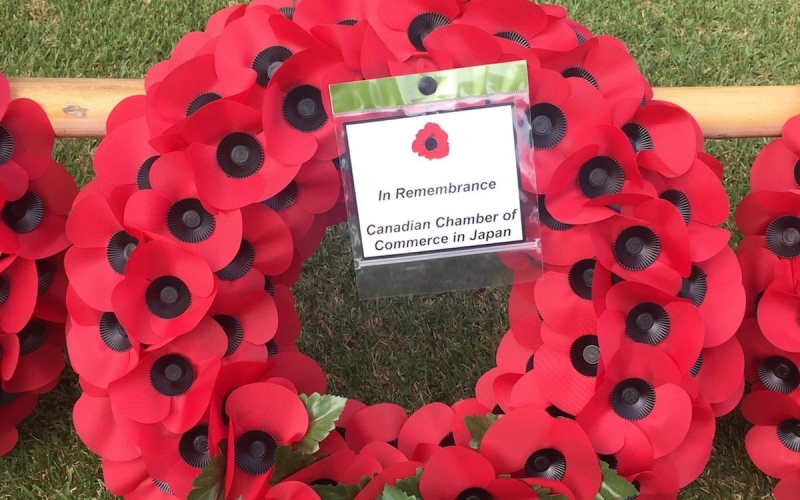 Touching ceremony for the 100th anniversary of The First World War armistice on 11 November 1918, aka "The Great War" in Japan.

9.7mm soldiers perished, 10mm civilians dead and 21mm were wounded. It was supposed to be the war to end all wars, but that has not worked out.

Japan participated in WW I from 1914 to 1918 in an alliance with Entente Powers and played a key role in securing sea lanes in the West Pacific and Indian Oceans against the Imperial German Navy as member of the Allies. The Allied Powers were formed as a defense against the aggression of Germany. The Allied Powers were also known as the Entente (informal alliance) beginning as an alliance between Russia, France and Britain called the "Triple Entente". Germany declared war on France August 3, 1914.

The only 3 species on Earth that go to war are ants, crows and humans. Current global "leadership" does not appear to embrace hand holding, hand crushing is the move of the day.

The bulk of the Canadian troops buried at this Commonwealth War Cemetery (100 odd, paired with the brave fallen of New Zealand) were from The Royal Rifles of Canada and The Winnipeg Granadiers. There are approx. 2,000 Commonwealth soldiers buried at the site (divided into the British section, Australian section, Canadian & New Zealand section, and the Indian section). Of the approx. 3,500 POWs who died in Japan during the war (WW II), the ashes of Americans and Netherlanders were brought back to their respective homelands. All Commonwealth servicemen were interned at the Commonwealth war Cemetery in Yokohama.

A big Canadian representation on hand from the Royal Canadian Navy (HMCS Calgary and MV Asterix) which made the event extra special. They are next back in Canada December 18th.

In Flanders fields the poppies blow

Between the crosses, row on row

That mark our place; and in the sky

Scarce heard amid the guns below.

We are the Dead. Short days ago

Loved and we were loved, and now we lie

Take up our quarrel with the foe:

To you from failing hands we throw

The torch; be your to hold it high.

If ye brea faith with us who die

We shall not sleep, though poppies grow