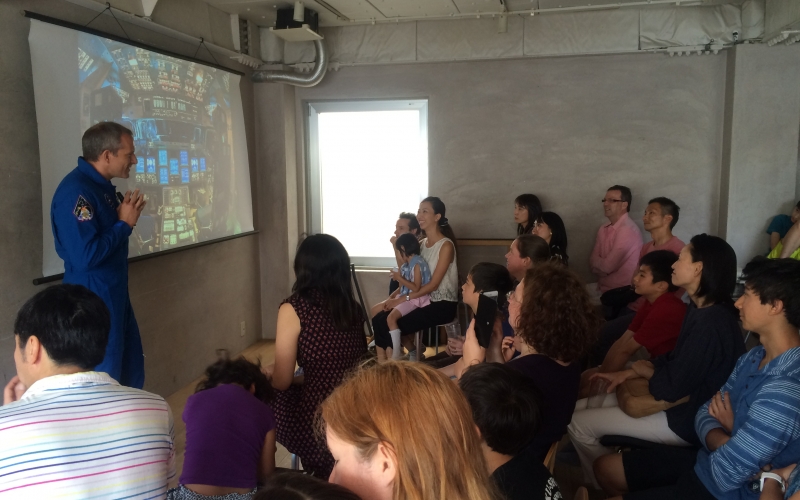 On June 4, 2016 CCCJ members and families were invited to meet with David Saint-Jacques, Canadian astronaut bound for a mission to the International Space Station in 2018. Following our insights from this unique presentation. The CCCJ wishes to reiterate warm thanks to Mr. Saint-Jacques for kindly providing time to share with us many inspiring stories.

9 years, that’s the time it will have taken David Saint-Jacques to go to space after joining Canada’s contingent of two astronauts, the second rarest job in Canada after that of the Prime Minister.

While he is not quite in space yet, it was announced in May that he would be the 12th Canadian to go to space, launching in November 2018 on a 6-month mission to the International Space Station (ISS). Saying that it took him only 9 years may be a bit misleading considering that he got accepted in the astronaut program at 37 years old after building an impressive resume that was key to get him the job, a job that is never a first job according to Saint-Jacques. After obtaining an engineering degree from Ecole Polytechnique in Montreal, he flew to Paris to work as a software programmer, then Cambridge, England where he obtained his PHD in astro-physics, then Japan where as a research student at Tokyo University he spent a large chunk of his time operating Todai’s super telescope in Hawaii. At age 30, he joined the medicine program at Laval University in Quebec City and after completing his internship in Montreal he did a stint in a Lebanon refugee camp as a doctor, where, by his own word, he was seeking understanding of the middle-east issue. He then moved to Northern Quebec where he worked as a doctor in Inuit communities, experiencing there a culture just as different from his own as any culture seen in foreign countries anywhere on the globe.

Saint-Jacques was in Japan in June, spending two weeks at JAXA in Tsukuba where he was learning how to operate the ISS Japanese module. He took a few hours between training and climbing Mount Fuji to give CCCJ members and their families a presentation on his adventure and his upcoming mission to the ISS. The Station is the size of a football field, (5 hockey rinks if you are Canadian) and includes modules from the US, Japan, Russia, and Europe. The Japanese one, is apparently the neatest and best organized one. The development of the station took many years. Space is such a high priority that even at the peak of the cold war, when the USSR and the US had nothing to say to each other, except threats maybe, the back channel discussions on Space were still ongoing, first on the Soyuz-Apollo project and then the Shuttle-MIR project, which was the precursor to the ISS. Then, while all the other countries where working on their own projects, Boris Yeltsin and Bill Clinton decided to collaborate on the ISS and the other countries, some of which were at the time developing their own space projects, soon decided to join the ISS project, including Canada, Europe and Japan.

Saint-Jacques was clear, ‘’our next goal is Mars’’, and while for many adults it does not seem so relevant now, many of our kids could very well walk on the red planet in a not so distant future. We could technically today make it to Mars, but would not be able to return.  The key to achieve the level of autonomy which would make possible a return trip to Mars and also allow us to truly begin space exploration, is to be able to recreate an earth like ecosystem aboard a space ship. That means being able to recycle the air, the water, and grow food. Already, many aspects of this endeavor are being achieved through mechanical means, all water in the ISS is continuously recycled, including urine, which is processed to be turned into drinkable water again. Lettuce is being grown inside the station as an experiment, but it is still a long way to real autonomy.  ‘’this is the main thing I have realized since joining the astronaut program’’ says Saint-Jacques while showing the audience a beautiful image of Earth floating in space taken from the station, ‘’ Earth itself is a spaceship travelling across space’’ Like the ISS, water or air cannot be added to it, what is there is what we have. We have to work together to make sure that the natural system that recycles our air and water is kept in good condition.

One of the many children in the audience asked what astronauts’ do in the station when they are not working or working out on one of the devices developed to train muscles in no-gravity environments.  ‘’They look at the Earth’’. From the ISS, the view of the planet is indeed breathtaking. Seen from space, northern lights and southern lights, thunder storms, seen at a speed of 8km a second, the speed required for the ISS to stay in orbit, present an amazing sight. That and the millions of lights visible at night, literally highlighting the presence of human agglomerations, would be enough to captivate anyone, as memories of friends and places emerge while passing over a familiar coastline, places visited or even your home town.

Today, and since November 2000, whenever you go knocking at one of the ISS 4 doors, there is always someone to welcome you. With Russian, English, French, Italian, German, English or Japanese being spoken on board, the ISS is truly a multicultural environment where the nationality of the residents, and the manufacturing and operational standards of the equipment offers a sampling of the diversity found on earth. When in space, what an Astronaut experiences first hand is that while there are great differences between all of us, we are all from the same place. Saint-Jacques admits that there is still a lot of politics and cultural differences in play when it comes to make the various space projects move forward, but there is also a realization that ''this'' is bigger than any single individual or nation’s interest, it is an endeavor that defines the evolution of mankind.  The ISS is a very powerful symbol of what we can accomplish when we work together, and space exploration is and will remain one of the main drivers of international collaboration for many years to come.