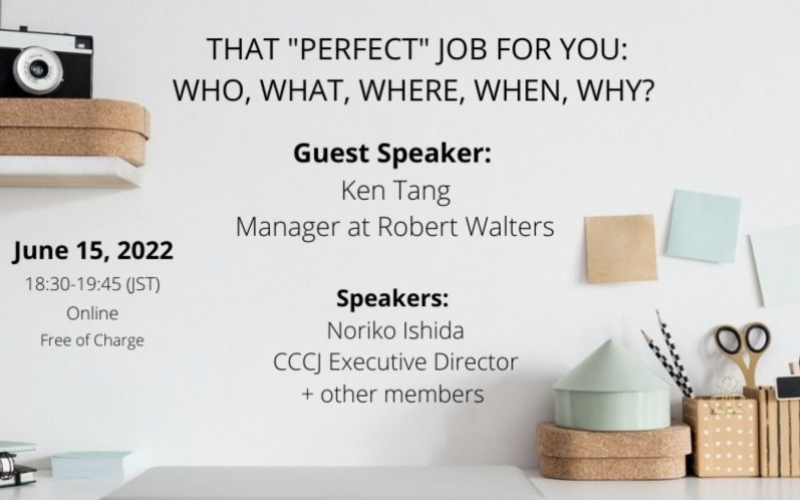 On Wednesday, June 15, the CCCJ held a second mentoring seminar online with 25 participants, where discussions were held by Ken Tang, Noriko Ishida and Riyo Whitney.

Ken Tang, Manager, Robert Walters, led his discussion with tips for job searches and which skills are currently the most desirable in Japan. Some of the points that were made included an openness to take on different roles that you may be used to. Yet the most important skill to have when finding a job in Japan, is the ability to work in English. As Japan has a shortage of IT workers, there is an increasing openness in STEM to foreigners, in which English is highly demanded. Other than English, it can also be very helpful if you have language abilities in Mandarin as well. During the Q&A session, a question was asked about the difference in monolingual and bilingual skills when it comes to job offers. Mr. Tang answered that by stating that monolinguals may be subject to a ‘career and salary ceiling’ which leads to no advances in the workplace. Bilinguals are more likely to find better paying jobs, and promotions according to their language abilities.

Noriko Ishida, Executive Director, Canadian Chamber of Commerce, talked about her personal experiences and personal point of view, and how she got started at the Canadian Chamber of Commerce. While discussing the traditional and respected path that young Japanese women take once they are out of school, Ishida-san addresses the difference in Japanese and Canadian work culture. For example, Canadian organizations tend to not focus on the processes much, but are more goal oriented. In a way, this makes them more optimistic. On the other hand, Japanese organizations created many back plans in case the first one does not work out; every step of the way should be focused on making it as perfect as it can be. Ishida-san finishes her discussions by talking about networking, as it is one of the most important parts of finding a job.

Thank you to Ken Tang and Noriko Ishida for speaking at this event, Riyo Whitney for moderating, and everyone else for joining this seminar. If you would like to attend more events like this, please sign up to become a member, so you don’t miss out for other future events!