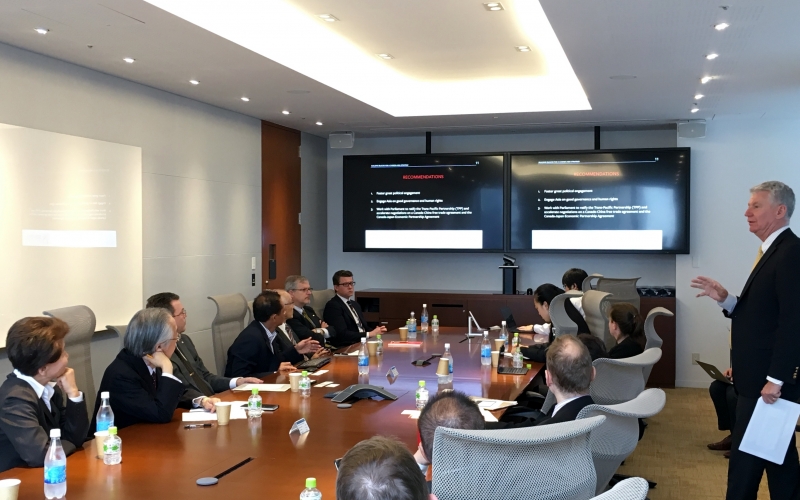 On April 5, members of the CCCJ's Honorary Board of Advisors and Board of Governors welcomed Asia Pacific Foundation of Canada's President & CEO, Stewart Beck for a luncheon to discuss the foundation's strategy and recommendations for expanding Canada's economic engagement with Asia.

Chairman Haigh noted the important role that Mr. Beck has played within the Asia Pacific Foundation over the last 18 months and at the Canadian Government's DFATD (now Global Affairs Canada) over three decades in formulating strategy and implementing policy initiatives that help change relations between Canada and its Asian trading partners.

Mr. Beck later emphasized that the key has always been how can Canada work to help its trading partners solve problems in areas related to energy, food security, infrastructure investment or education/ training.

Good timing is essential to any business opportunity and with a new Canadian Government emerging from its "honeymoon" period, the CCCJ needs to now take a look at shifting nuances in policy and changing strategies.

In Mr. Beck's presentation, "Building Blocks for a Canada-Asia Strategy," he proposes a series of recommendations to Canadian decision makers to consider in response to the rise of Asia as a global economic power and political force.

Indeed, by 2050, more than 40%of global trade and 64% of the world's middle class will be Asia-based. So, in the words of hockey great Wayne Gretzky, "You have to skate where the puck is going to be, if you want to score."

The strategy is one that recognizes that the key to leveraging Canada's strengths is not to establish a "one-size-fits-all" approach to the region. Rather, an effective Asia strategy will be one that considers the size, vastness and diversity of the Asian region. Federally and provincially, Canadian policy makers must decide the foundation of the Japan-Canada relationship (probably energy security in return of job-rich tech based investment), and consistently build ties on that basis. The Canadian Chamber's role is to push Canadian stakeholders to take action based on this fundamental relationship. 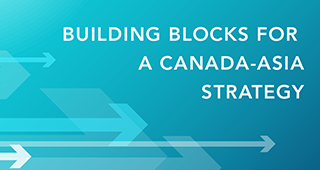 Following the presentation, the discussion took a Japan focus. CCCJ Governors discussed important Canada-Japan issues such as infrastructure, energy and of course, the impending ratification of the TPP.
CCCJ Vice Chair, Mr. Eric de Groot, applauded the attention given by the report and its recommendations to the importance of Canada concluding trade deals with Asian partners in particular Japan, citing that negotiations for the Canada-Japan Economic Partnership (CJEPA) Agreement have been on hold since the last round of talks took place in Tokyo in November 2014.

Advocacy for the conclusion of the CJEPA has been a priority for the CCCJ since 2007, releasing a policy paper "Capitalizing on Natural Synergies" in 2010 and releasing a joint statement with the Keidanren in 2012 on the launch of negotiations and following up with advocacy activities in 2013 and 2014.

The Asia Pacific Foundation of Canada is a not-for-profit organization focused on Canada's relations with Asia. Our mission is to be Canada's catalyst for engagement with Asia and Asia's bridge to Canada. We do this by partnering with both the private and public sector. Click here to learn more about the Asia Pacific Foundation and its activities.

The CCCJ and APF have enjoyed a long standing relationship which most recently has involved collaboration in the quarterly production of The Canadian, which is available for download here.