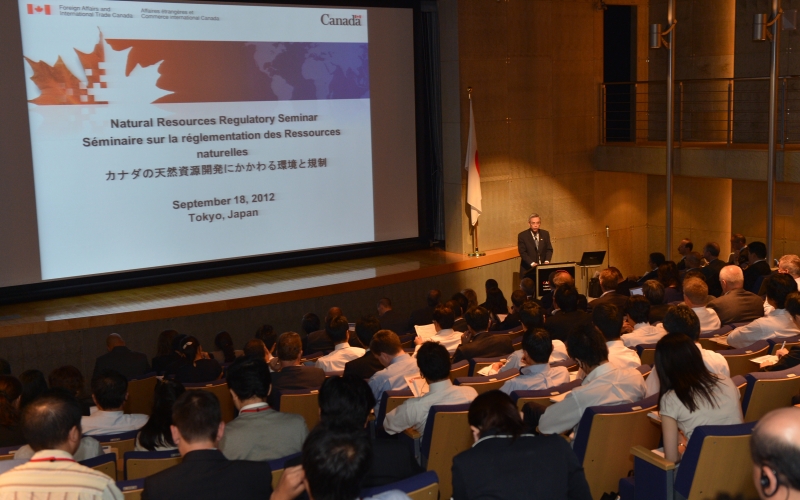 The Honourable Joe Oliver, Canada’s Minister of Natural Resources on Tuesday, September 18 addressed a group of over 125 at the Canadian Embassy including a number of CCCJ Members. In Japan to promote Canada as a secure supply source of natural resources, Minister Oliver spoke of the vast resources available as well as the favourable investment climate offered in Canada. Minister Oliver reported on the current bilateral trade and investment levels in resources between the two countries while also expressing encouragement and optimism at future growth. The Minister did bring to the group’s attention that although Canada does currently have significant levels of trade with Japan in minerals and metals, our exports of energy to Japan have not yet been realized, representing massive opportunity for growth.

“As the largest importer of liquefied natural gas or LNG, Japan should have a particular interest in Canada. There are up to 1,300 trillion cubic feet, or 37 trillion cubic metres in natural gas resources, which will undoubtedly increase as we discover more shale gas and offshore resources. This puts us in the top tier globally, including shale gas.”

Minister Oliver closed with re-affirming the importance of the Canada-Japan relationship, encouraging the audience to continue to build on recent bilateral successes.

The CCCJ wishes to thank Osler, Hoskin and Harcourt for sponsoring our CCCJ Guests to this luncheon as well as the Canadian Embassy as host.