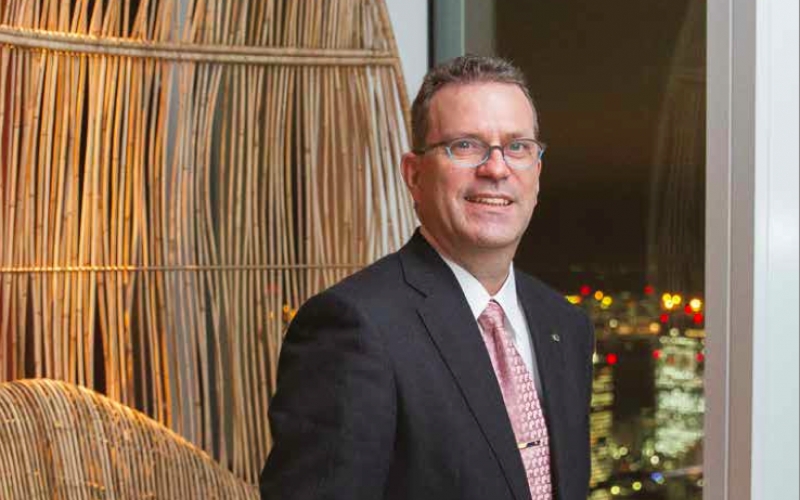 Ron Haigh was elected as Chairman of the CCCJ in November 2015.

CHALLENGE
It’s quite fitting that a favourite Canadian actor of Ron Haigh, the new chairman of the Canadian Chamber of Commerce in Japan, should be William Shatner (Capt. James t. Kirk of the original Star Trek TV series). “His opening line at the beginning of each episode, ‘To boldly go where no man has gone before,’ sort of fits my new responsibilities and goals with the chamber,” Haigh says during an interview in the Sky Suite of the Andaz Hotel in Tokyo.

 Born in Churchill, Manitoba, Haigh moved around with his family to Nova Scotia and New Brunswick before settling in Quebec for six years. He graduated from the University of Toronto with degrees in English literature and Japanese studies. “My first job was at an interpreter training program centre where I would analyze the skills of Japanese interpreters and custom design a program for them to improve their abilities. Then I got interviewed by Toyota in New York and was posted to Tokyo. I’ve been with them for 27 years now.”

Commuting regularly between Tokyo, Shizuoka (where he has a house) and Toyota City, Haigh is Toyota’s project manager for the Americas and handles external affairs for Canada where the company sells about 200,000 units a year. “I’m always dealing with federal government officials, bureaucrats, provincial officials and people in supporting industries. We get a lot of VIP visitors, and sometimes I take them on plant tours. I have the gift of the gab, I suppose.”

IMPROVEMENT
Before beginning his two-year term as CCCJ chairman, Haigh realized he needed to be in the chamber’s office in Tokyo some time each week, rather than just conduct business with members via email and attend meetings with the board of governors. So, he’s taken the unprecedented step of devoting two weekdays (usually Wednesday and Thursday) to camp out in the Tokyo office.

“A lot of people were surprised. They wondered how I could manage,” Haigh says. “Becoming CCCJ chairman would not have been possible without Toyota’s understanding. I went to the board of directors to to get approval to spend two days a week working for the Chamber and convince them that I could still do my job.” As the new year begins, Haigh believes the Chamber has “to ride two horses,” as he puts it. “One is the work horse, where we will make our processes more professional. When someone becomes a member, they should be treated at a certain standard that makes them feel glad they’re a member and that the Chamber is contributing to their business activities. The other horse is the charger— the one that races into the horizon, to find new ways to do what we should always be doing, which is expanding business opportunities for our Canadian and Japanese members, providing information useful to their business and creating networking events to allow them to exchange information.”

The CCCJ currently has around 500 members in Japan, and around 40 per cent of them are Japanese. “It’s all about two different cultures working together to complement each other,” Haigh says. “Many Japanese members lived in Canada. They loved it and don’t want to let go. So, when they came back to Japan, they joined the chamber as one way for them to keep up their interest in Canadian business and culture. We are like a little piece of Canada for them.”

Haigh hopes to grow the corporate membership this year. “One of the benefits of joining the chamber is that we really listen to our members and help them based on what they need, rather than presuming to tell them what they should do. The most important thing I can bring to this position is to listen to people, and then deliver to their expectations.”

One trade issue of note to CCCJ members is certain to be the 12-nation Trans-Pacific Partnership (TPP) pact that was hammered out in November. Contents of the negotiations were confidential until a massive document with all sorts of amendments was released soon after the deal was struck. “It’s quite overwhelming,” Haigh says. “I have some of Toyota’s best consultants trying to work out the implications. But what can we say for sure? Well, it will expand export opportunities for both Canadian and Japanese companies. It’s going to increase competition—and that’s wonderful for the consumer. What’s still unclear is whether it will come into effect before or after the U.S. presidential election in November.”

GO AND SEE
One mission of the chamber, Haigh says, is to better acquaint the Japanese public with Canadian companies and products. “Right now, if you went out onto the street and asked Japanese people what they think Canada is famous for, they’d probably say maple syrup and Anne of Green Gables.” He adds that one of the biggest misperceptions about Canada he’s encountered from Japanese people during his 30 years in Japan is the country’s size. “They don’t understand how large Canada is. When I first got married, my Japanese wife and I got on a train in Vancouver and spent 3 1/2 days going to Toronto. I told her, ‘Now you’ve seen half of Canada. Do you want to see the other half?’ She couldn’t grasp how big the country is. Another misconception is some Japanese think all Canadians speak English and French.”

Besides the TPP, another topic has his and the chamber’s attention. “If you’ve lived outside of Canada for five years, you lose the right to vote—unless you can fly back and have proof of your last Canadian address. We’ve tried to publicize this by getting together with five other Canadian chambers in Asia and sending letters to news media.”

Haigh says the chamber will continue its intern program for students from the Tokai region. The CCCJ sponsors youth in their final year of high school to come to Tokyo for one week and stay at members’ houses and see their workplaces. “That’s just one example of doing something that contributes to the community,” Haigh explains.

RESPECT & TEAMWORK
After his three or four days in Tokyo each week, it’s back to Toyota HQ in Aichi Prefecture. The company had a big year in 2015, in which it regained its title as the world’s no. 1 automaker in terms of global sales. The 4th-generation Prius hybrid has just made its debut in Japan and will roll out in North America in February. “One thing people misunderstand about Toyota is that they might think we’re great because we sell more cars than anyone else or have a greater market capitalization. Those aren’t the main reasons why Toyota is a great company. It’s a great company because it was established to do something for society and still considers the needs of different stakeholders and customers. We have close to 10,000 engineers in Toyota City who are thinking each day what they can do to make consumers more thrilled about our cars.”

Haigh says having Toyota President Akio Toyoda for a boss helps. “He’s a wonderful person to work with. He’s energetic and sincere and has a love and understanding of cars because he trained to be a professional race car driver. He’s teaching us once again that automobiles should be exciting and inspiring. The new generation Prius is a different concept from before. People will buy it because it’s fun to drive and it’s good for the environment,” says Haigh, who drives an Estima hybrid.

THE RON HAIGH WAY
In between his commuting, Haigh enjoys fine dining and wine. “My idea of a great meal is kaiseki (traditional Japanese) cuisine that reflects the seasons. The presentation makes it so beautiful to look at. I have also been trying to write fiction novels—something realistic with a supernatural touch that gives you a ‘what if’ feeling.” Although he doesn’t play sports, he doesn’t hesitate when asked his favourite ice hockey team: “Definitely the Montreal Canadiens. When I was growing up in Quebec, we watched them every week. That was our religion.”

Despite the constant travel between Tokyo, Shizuoka and Toyota City, Haigh says he never tires of travelling. “Nobody bothers me on the shinkansen (bullet train). Besides, you see lovely countryside, rolling hills and greenery. Having travelled back and forth, I can now recognize individual houses. ‘Oh, there’s Mr Suzuki’s house. He hasn’t put out the garbage. I wonder if he’s ok.’ It actually gets like that.”