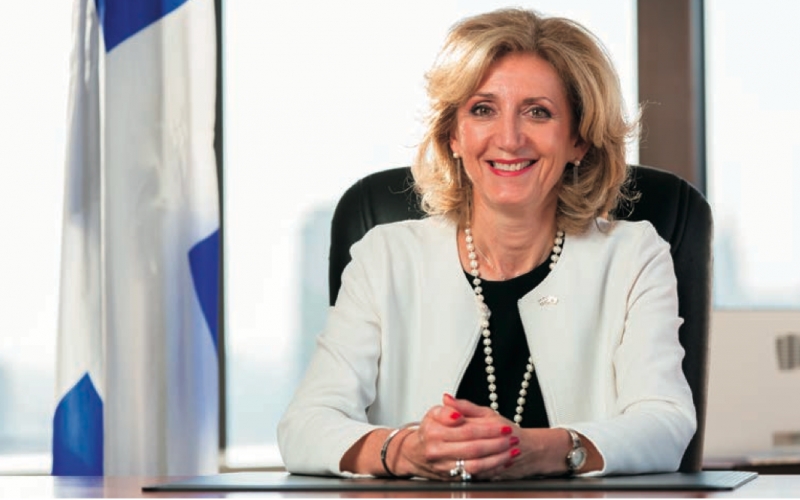 Claire Deronzier is the General Delegate of Quebec to Tokyo.

With 25 years experience in Quebec’s public service under her belt, Claire Deronzier is a veritable go-getter. A French language communications expert and business strategist, she was appointed Déléguée générale (Delegate General) to the Délégation générale du Québec à Tokyo (Quebec Government Office in Tokyo ) in April 2013 — the second woman in 40 years to be assigned to Japan. She quickly moved up the government ladder, taking on greater responsibilities, notably as assistant deputy minister at the Ministry of Immigration and Cultural Communities, her last job before her posting to Tokyo. A seasoned government official, she is well acquainted with the worlds of politics and diplomacy.

Only six months into her post as Delegate General in Tokyo, Deronzier had already organized a number of meetings with political, business and institutional leaders. “In Japan, the quality of the relationships bears as much importance as the product,” she says. “Moreover, for Quebec, speaking French helps in building relationships with people in political, diplomatic and business circles.” This strategy “has helped multiply the number of high-level meetings and forge active and collaborative ties with Prime Minister Shinzo Abe’s office.” She notes that in 2014 and 2015 she was able to reach 3,000 people interested in Quebec’s promotional activities through the Francophonie network in Tokyo, Kyoto and Kobe. Seeing how much interest Molière’s language generates in Japan, Deronzier made it her duty to secure the post of vice-president of the Council for the Promotion of la Francophonie in Japan. This affiliation enables her to exercise official leadership, even in non-member states of the International Organization of la Francophonie (OIF) like Japan.

Last July, Ms. Deronzier and His Excellency Ahmed Araita Ali, the ambassador of Djibouti, headed a delegation of seven young French-speaking Japanese (along with Masazaku Nagata from the Prime Minister’s Office) to Liège, Belgium, for the second edition of the French Language World Forum to promote Japan to Francophones from around the world. The Japenese delegation, Deronzier says, was the “media’s new darling,” adding: “Several interviews were conducted by prominent media outlets including TV5. I don’t think people realize the interest Japan generates in French speaking countries.”

WHY LEARN FRENCH?
One-third of the participating nations at the 2020 Tokyo Olympics are members of the OIF, which consists of 80 member states and governments (57 members and 23 observers). “Many volunteers involved in the organization of the 2020 Olympics will elect to learn French, as was the case during the 1998 Nagano Winter Olympics,” Deronzier predicts.

The popularity of French worldwide is explained by the perception many people have of it. “The Japanese romanticize France,” says Deronzier. “While many associate French with arts and culture, others recognize its value — either for work, overseas travel or a certain lifestyle and underlying values attributable to la Francophonie.” Today, with the efforts conducted by the Council for the promotion of la Francophonie in Japan, the Japanese are discovering a new diverse group of countries also speaking French. The attraction is mutual. “Japan is a wealthy nation that stands at the forefront of technology and is the stuff of dreams,” the Delegate General explains. “The cool Japan, the anime, manga and Japanese creativity all fascinate Francophone youth. For the young Europeans, Africans and Americans, Japan is a world to discover.”

FAR AWAY, YET SO CLOSE
For Deronzier, the distance that separates Japan from the Francophone world makes it somewhat inaccessible. In Liège, she recounts that “meeting young Japanese people who can speak French was a revelation for many Francophones. People suddenly realized that it is possible to get closer to Japan, in French, and to maintain ties through social media.” For Quebec, which ranks third worldwide in terms of video game development and 3D animation techniques, “digital technology is not only essential, it is a lever for the economic growth of the entire cultural network, transforming how we create and spread culture,” Deronzier says. She adds that “the talk now is of the Francophonie Economic Space.” In order to reach a broader Japanese public, the Quebec Government Office in Tokyo has revitalized its website, doubled its Twitter followers and created a Facebook page in both French and Japanese.

QUEBEC’S LIFESTYLE AND CULTURE
Quebec has made a name for itself through its dynamism, innovation and internationally acclaimed cultural products. “When you put together Quebec’s gastronomy, fashion, culture and design — we have a new francophone lifestyle from North America — something quite appealing to the Japanese,” says Deronzier. “The reputation of Quebec’s culture helps support the Delegation’s activities — especially trade and diplomatic — with its Japanese partners,” she continues. “Part of doing business is getting to know your partner better. Enjoying culture or sports may create bonds between people. We know that people in Quebec and Japan share a deep interest in cultural activities. One recent example is Ovo a Cirque du Soleil production with its 585 performances in Japan that drew an amazing number of spectators. And their 2016 tour, Totem has already been announced.”

On the music scene, the prestigious Montreal Symphony Orchestra, led by none other than Japanese-born American conductor Kent Nagano, gave performances in five Japanese cities in 2014.
Japanese fans of Quebec movies are also legion. “Out of six Canadian movies — five of those presented at the 2014 Tokyo International Film Festival — were from Quebec,” remarks Deronzier proudly. Conversely, Japan’s film industry is present in Quebec, notably thanks to the Japanese Film Festival in Montreal.

A WIN-WIN SITUATION
In 2014, Japan was the seventh largest global importer of Quebec goods, Deronzier reveals. With over 45 per cent of Quebec’s GDP deriving from its exports of goods and services, free trade agreements are one way to facilitate the internationalization of companies. By lowering entry barriers, these agreements improve Quebec companies’ competitiveness in these new markets. “Another way to increase win-win business activities is through the creation of joint ventures and strategic alliances,” says Deronzier.

“Last year’s implementation by Sony Corporation and Hydro-Quebec of a new joint venture dedicated to research and development of a large-scale energy storage system for power grids is particularly significant given the decision to implement the company in Quebec,” the DGQT says. For Sony, this association is an opportunity to benefit from Hydro Quebec’s extensive knowledge of rechargeable lithium-ion batteries.

A DRIVING FORCE IN THE GREEN ECONOMY
In an effort to reduce its carbon footprint, Quebec adopted the Sustainable Development Act in 2006. The DGQT reports that “Quebec’s economy is amongst those with the highest standards in terms of protection of the environment,” citing the province’s creation of a regulated carbon market in January 2013 as “a veritable driving force for business opportunities in this sector.” This month, a delegation of over twenty researchers and high-level business representatives from Quebec — the largest in recent years — will be participating in the Science and Technology in Society forum (STS) in Kyoto. “Quebec has a growing interest in research and technological development partnerships with Japan,” the DGQT says. A joint Quebec-Kyoto seminar on environmentally sustainable cities will take place concurrently.

A strategic alliance between Nissan and Hydro-Quebec, which has enabled the province to expand Electric Circuit — its first 400-volt public charging network — was inaugurated in March 2011 only a year after Nissan launched the Leaf, the first 100 per cent electric consumer car. “Since then, 109 private and institutional partners have joined the Electric Circuit initiative and the network now has over 4 500 members,” the DGQT reveals, adding Nissan’s financial contribution will help install 25 additional rapid charging stations by 2016.

MEDICAGO: A FRUITFUL INVESTMENT
A C$245 million investment by Mitsubishi Tanabe Pharma in Medicago — expected to create 200 new jobs — illustrates both Japan’s desire to expand its presence in Africa and Quebec’s wish to reinforce its position as a key biotechnology player in the global industry. This partnership helped finance the development of new experimental vaccines for the treatment of Ebola.

As a member of the CCCJ, Claire Deronzier is determined to carry on with her networking efforts. “I want to encourage enterprises from Quebec to actively participate in the Chamber’s activities so that they can contribute to and extend the intercultural dialogue and friendship exchange with their Japanese counterparts.” As a final note, she offers: “I extend an invitation to these businesses to help develop, with the Canadian Chamber of Commerce in Japan, a strong and dynamic presence for Quebec!”