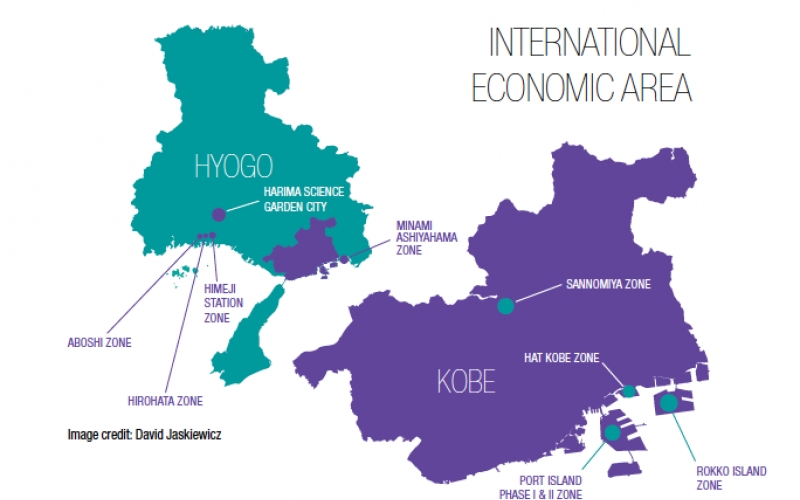 By Ron Haigh - Ron Haigh is the chairman of the Canadian Chamber of Commerce in Japan and Toyota Motor Corporation project manager for the Americas group.

Much of the world economy seems to float in a sea of stagnation, subject atbest to only irregular spurts of growth. In response, the Japanese government launched the Japan Revitalization Strategy in an effort to encourage its economic development. A key part of this program is a concerted effort to increase foreign direct investment (FDI) from beyond the country’s borders.

Hyogo Prefecture is a good example of an investment location taking the initiative to enhance FDI. It uses promotional activities by the governor and offers incentives to foreign and foreign-affiliated companies to help minimize the risks involved—and maximize profits.

In March, representatives from overseas companies, the CCCJ and other foreign chambers of commerce in Japan met with Governor Toshizo Ido at the Hyogo Global Business Summit to exchange opinions and discuss how to make the region more attractive to businesses. The prefecture has been hosting this event annually since 1998 as one of many initiatives to increase FDI. Other enterprises include the successful lobbying for an extension of foreign residential status in Japan from three to five years and the granting of special location privileges for foreign companies in the region.

This year, one of the biggest topics was how to better market the Hyogo- Kobe region and advertise more effectively. A key suggestion by many of the participants was for the coordinators to decide on and use consistent branding that epitimizes and distinguishes Hyogo-Kobe from other investment locations.

Hyogo has many freatures that make it an attractive spot for FDI:

• It’s a transportation and logistics
hub (less than three hours from Tokyo by bullet train).

• It has one domestic and two
international airports (within
an hour of Kobe city).

• It contains the longest and most
developed highway system in
the country.

• It has a globally prominent
container seaport.

The Hyogo and Kobe region also provides many resources for business, including world-class research complexes like Riken’s Spring-8 supercomputer and the Center
for Developmental Biology. It also supports foreign companies active in any of the region’s 10 international economic areas with a 1/3 exemption on the corporate enterprise tax as well as subsidies for office rent, new employees and establishment costs.

To effectively compete against other world-class investment destinations, summit participants stressed the
importance of focusing on a distinct message. As the region enjoys a well-developed social infrastructure, many health industry-related companies and metropolitan convenience without the hyper-urban trappings of Tokyo or Osaka—traffic jams and overcrowded trains are rarely an issue—“Best Living Environment for Work-Life Balance” was suggested as a potential focus for communication with foreign investors.

Hyogo is an excellent environment for Canadian companies looking to branch out into Japanese and Asian markets. With its unique message, strategic multi-year outreach plan and expanded collaboration with foreign stakeholders; the region’s FDI incentives are a boon to Canadian companies to invest in Japan—and perhaps a great model for attracting the same to Canada.