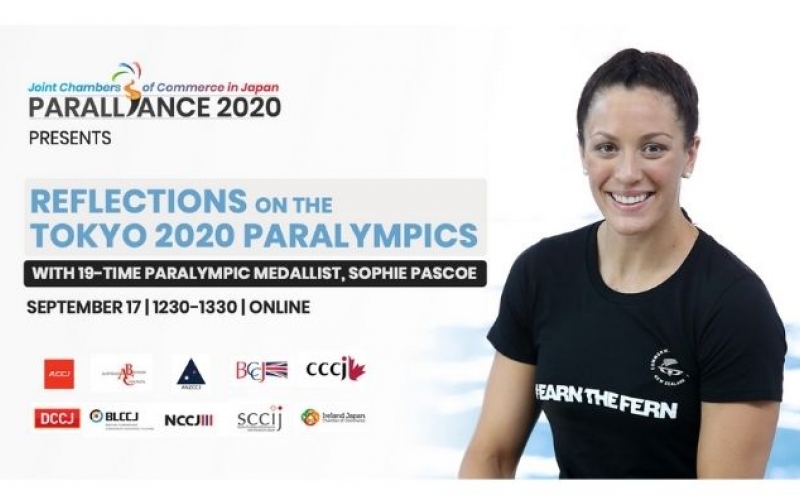 The postponed Tokyo 2020 Paralympic Games drew to a colourful close on Sunday, September 5, after nearly two weeks of competition among more than 4,400 of the world’s top athletes with impairments. The Games saw athletes compete in 539 events across 22 different sports, with an astonishing 69 World and 124 Paralympic records being broken. The 2020 Games also saw more female athletes take part than ever before.

On Friday September 17, the Paralliance is delighted to welcome New Zealand’s most decorated Paralympic athlete, Sophie Pascoe, to share with us about her journey as a Paralympic athlete swimmer and her experiences of Japan and the Tokyo 2020 Games. Sophie has won an extraordinary total of 19 medals – 11 golds, 7 silvers and 1 bronze – making her New Zealand’s most successful Paralympian to date. In addition to her stellar medal collection, Sophie has won New Zealand’s Sportsperson with an Impairment of the Year four times. She is also a mentee EY’s Women Athletes in Business Network programme, which won the British Business Award for Diversity & Inclusion in 2020.

Join us on September 17, to hear from one of these very athletes who is an inspiration to so many, both in and outside of the pool.

Note: A Zoom access link will be sent to all participants 2 hours before the session is scheduled to start

Sophie Pascoe is New Zealand’s most successful Paralympian. Sophie appeared at her first Paralympics games in Beijing 2008 as a 15 year-old producing stunning performances in the pool, winning 3 gold and 1 silver medal. Over the past decade, Sophie has firmly cemented her place as a national treasure in New Zealand. Along with 19 Paralympic medals (including 11 gold), Sophie also holds 13 IPC world titles and multiple world records.

In 2018, Pascoe made further history when she was named flag-bearer and team captain at the Gold Coast Commonwealth Games, becoming the first Para athlete to lead the New Zealand team out at a major Games.  A below-the-knee amputee following a lawnmower accident when she was 2 years old,  Pascoe is a fierce competitor and is known for her work ethic in and out of the pool always bringing passion and humility to anything she does.

Sophie has strived to increase Paralympic awareness not only in New Zealand but globally and is intent on leaving a lasting legacy for others to aspire to as she has paved the way for equality for disabled athletes and females in sport.

This joint alliance of 20 international chambers of commerce in Japan – The Paralliance – was created in 2020, to support the success of the Tokyo 2020 Paralympic Games. The Paralympics are a global celebration of diversity and inclusion, sporting achievement, and personal endeavour.

Mission
Support Japan’s delivery of the Tokyo 2020 Paralympics, fostering a legacy of more inclusive communities and embracing opportunities for international business and exchange.

Pledge
Participating Chambers of Commerce will collectively support the Tokyo 2020 Paralympic Committee in its delivery of an outstanding and popular games.

This is an opportunity for all of us to recognise our mission and commit to our pledge –
Join the Paralliance’s third event on Friday, September 17!

Members of the Paralliance are: