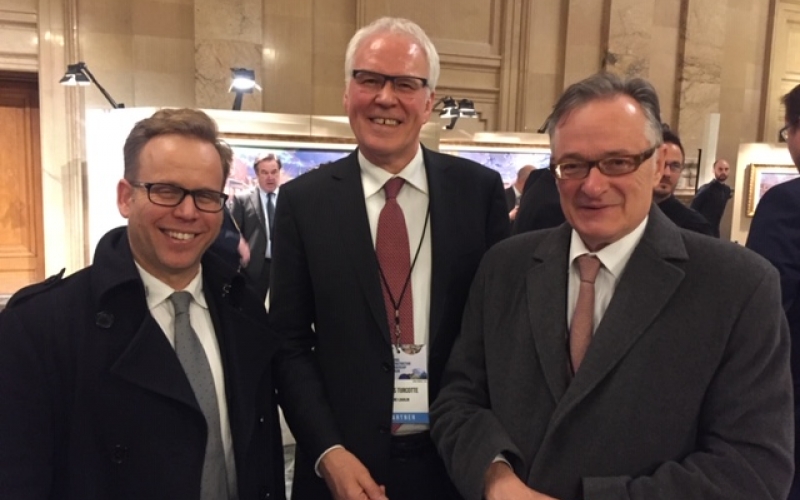 It is with sadness we share that Wilf Wakely (right), former chair of the CCCJ, passed away on February 2nd. He was well-known by CCCJ members and many in the Canadian community in Japan.

Wilf Wakely was a big supporter of the CCCJ and that included its charity efforts. With that in mind, donations can be made to the CCCJ CSR fund to be used for an event or activity at a later date in memory of Wilf. If you make a donation you will automatically be entered into a raffle to win 1 of 3 Robert Batemen prints that were donated to the Chamber by Wilf.

Click here for donation, or please contact the CCCJ Office if you are interested in donating. If you make a donation you will automatically be entered into a raffle to win 1 of 3 Robert Batemen prints that were donated to the Chamber by Wilf.

In addition, the next issue of The Canadian Magazine will include a section remembering Wilf with comments from CCCJ members.

Eric Cole, a longtime member of the CCCJ who knew Wilf well has written a tribute we would like to share:

Wilf was an influential figure in the Canadian community in Japan, which can be summarized by this brief bio from The Japan Times in 2012:

"The current president of the CCCJ is Wilf Wakely who has been in Japan for 35 years. Born and raised in Vancouver, Wakely developed a strong interest in Japan when here as a student in 1965. He is fluent in Japanese and holds law degree from the University of British Columbia. From 1984-1987, he was seconded to the Department of External Affairs and posted to Japan as First Secretary, serving first as head of public affairs, and then press officer. Later, he was legal officer during the planning for the re-development of the Canadian Embassy. Finally, from 1993-1997, he was Commissioner, Trade and Investment for the government of British Columbia, in Kobe.

Currently, Wakely acts as Principal at Wakely Foreign Law Office. His focus is on corporate and business law advisory regarding international commercial transactions, such as licenses, distribution agreements and representation - including as resident director and statutory auditor. He also advises regarding government relations, encompassing regulatory negotiations and advice on sovereign developments, spanning the re-development of the Canadian Embassy, the European Union Delegation and other foreign missions in Tokyo."

While this summary is true, it hardly touches upon some of the special qualities of the man who made such an important impact in my life, and the lives of countless others in Japan and in Canada.

First and most importantly, Wilf was passionate and kind. He approached life with a fervent belief that he could make things better, and was tireless in his efforts to make the world a better place.

On the economic front, it’s well known that Wilf advocated tirelessly on behalf of many well-known Canadian companies. It wasn’t self-interest or profit that drove him; he wanted to make a difference and he had the energy and passion to fight to make it happen. Once Wilf was sold on a cause, woe be to the man who stood in his way. A case in point: ever since I met him, Wilf has been a tireless advocate for the bombardier 415 water bomber. Not because he wanted to make money (which he did, but any sane person would have long dropped this business on an ROI basis), but because it’s the best machine for the job and has been proven to save lives. This same passion extended to his advocacy on behalf of parents of children abducted and brought to Japan, of which Japan has had an unfortunate number of cases. In recent years this issue has come to be recognized more widely, but I well remember that Wilf was one of the first to take up the charge on this issue.

What I think a lot of people didn’t see about Wilf was just how sincerely he was driven to help people. As a lawyer, Wilf was perhaps best personified as an advocate. Certainly, this is true for the many people he helped on a pro-bono basis. But this advocacy extended to all of his clients. Wilf always brought passion to his work, whether as a lawyer, as a businessman, or as business-association advocate through his chamber work. He cared, and inspired others to care.

It saddened me to see some of his clients recognized and took advantage of his passion for their own self-interest. Some of his clients simply didn’t pay their bills, or otherwise live up to their responsibilities and obligations. But Wilf never lost faith in human nature. I could be accused of being somewhat cynical and pragmatic, but Wilf was always wholehearted in his belief in the goodness of others. I always envied and respected Wilf for his faith in others, when I might have been more wary. I like to believe that Wilf lived a richer life for taking a chance on these people.

Wilf was a gregarious and charming person. He made friends quickly and easily, and always had a joke ready to put anyone at ease. Yes, Wilf could also be difficult. He would harangue others to do his bidding, and he could be argumentative, stubborn, and wilful. But to reject him for these things is a mistake. Nobody is perfect.

The generosity of Wilf extended to his family, who graciously allowed me into their lives. Takako, Conan, and Tara all became an important part of my life, and are very much my second family. I have been blessed by the many invitations to the Wakely house, and been the happy beneficiary of some of the best cooking of anyone I know. Delicious food and lively conversation made for many a warm and wonderful evening at the Wakely manor. The many people who took part in this generous hospitality were lucky indeed.

Wilf loved his kids. Conan and Tara have both built successful careers and carved their own path in life. Wilf’s style of supporting his kids helped them to become strong and independent. But most importantly they are, like Wilf, kind people. Wilf had good reason to be proud of you.

Wilf had many interests outside of the professional realm. He was an avid history buff and enjoyed reading about WW2. He loved to build things – and to talk about building things – both of which he did with enthusiasm not usually seen among carpenters. Wilf and I spent many happy hours in my place in Hakone, occasionally working on building projects, but more often whiling away the hours in fun conversation while drinking, eating and cooking. I remember one occasion in particular, when Wilf shared with me the following quote from Hunter S. Thompson.

“Life should not be a journey to the grave with the intention of arriving safely in a pretty and well preserved body, but rather to skid in broadside in a cloud of smoke, thoroughly used up, totally worn out, and loudly proclaiming "Wow! What a Ride!”

For me, Wilf was much more than a lawyer, or a businessman, Japan expert, erstwhile comedian, or even a fellow Canadian. He was a genuinely kind and fun person, keenly intelligent and with a sharp sense of humor. He was a good friend to me, and the world is a little less bright today without him.