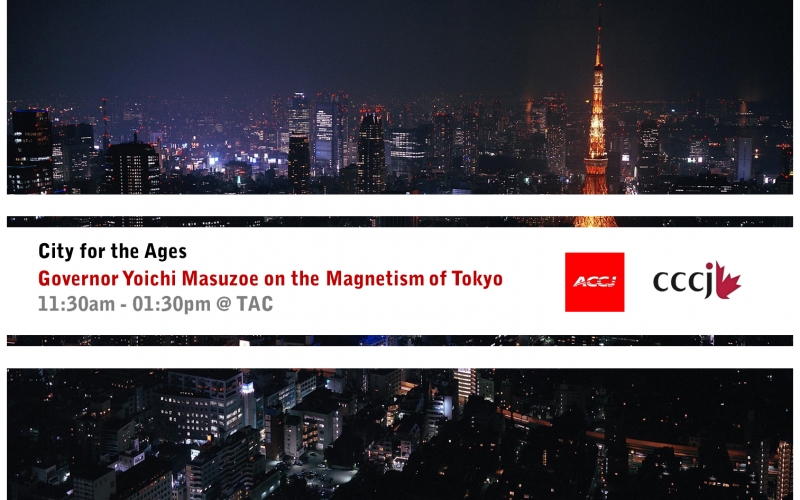 Tokyo Governor, Mr. Yoichi Masuzoe, met with members of various international Chambers of commerce on Thursday, September 24th to talk about important issues regarding the future of Tokyo as business hub.

Governor Masuzoe discussed the various initiatives that his administration is undertaking to make Tokyo an even more vibrant and welcoming city to businesses of all sorts - foreign and domestic, to travelers from all over the world and most importantly to its very citizens. More specifically, he provided his insights on issues such as: the revitalization of the economy through the strengthening of Tokyo as a Global Financial Center and a World Business Hub; enhancing Tokyo's strengths as a metropolitan and urban center; and the city’s efforts in gearing up for the 2020 Olympic and Paralympic Games.

Prior to the discussion, guests had a chance to network and mingle as well as enjoy a delicious lunch prepared by CCCJ Member Company, The Tokyo American Club.  Turnout for the event was high, with approximately 200 guests, from five different international business groups. CCCJ presence was strong at the event, led by Chairman Wakely, and CCCJ HBA Chair Sadaaki Numata, as well as other members of the CCCJ’s HBA and Board of Governors, as well as other notable names from the CCCJ’s general membership.

The CCCJ would like to thank the American Chamber of commerce in Japan for its leadership in organizing this event. Other participating Chambers are listed below.

Chamber events are a terrific opportunity to network and gain knowledge about various aspects of the Canada-Japan relationship and doing business in Japan. The CCCJ holds approximately 30 events per year covering a broad range of topics and themes. Joint Chamber events are also a way for CCCJ members to tap into the larger international-Japan business community as well as offer access to unique speaker sessions like: City for the Ages: Governor Yoichi Masuzoe on the Magnetism of Tokyo. Looking into 2016 our Chamber will continue to work with other international and domestic chambers in Japan to enhance opportunities for CCCJ members.