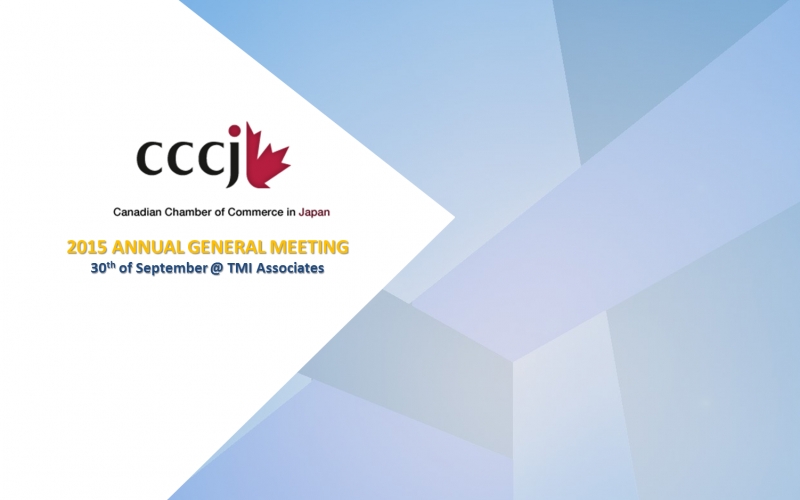 Pursuant to Article VII of the CCCJ Constitution, the CCCJ hosted its Annual General Meeting on September 30th at TMI Associates in Roppongi. 24 members were in attendance. At the meeting, CCCJ Chairman, Wilf Wakely gave an annual report which covered a review of the Chamber’s events, operations and finances.

With regards to events, Chairman Wakely discussed the high volume of events - up now at 38 annually – as well as commented on the different kinds of events offered, such as: business seminars, advocacy roundtables, social mixers, and joint chamber events.

Acting Treasurer & Chair of the Finance/Admin Committee, Greg McDonald provided an overview of the CCCJs audited finances. Members in attendance approved them, and passed a motion for Arakawa & Associates CPA.

Members also discussed the CCCJ’s new and improved quarterly publication, The Canadian.  Until last year, the Chamber’s magazine was produced in-house, however since Canada Day 2015, the publication’s business model has changed, and is now being managed by the Chamber’s publications committee in partnership with GPlus Media — the publisher of Japan Today, Tokyo Insight, GaijinPot and Savvy Tokyo. The Chamber still directs the magazine’s content.

In addition to the above, Chairman Wakely also assured members that the 2015 CCCJ Elections would be carried out by the end of October, as approved by members at a special general meeting on July 1st. Candidate profiles and information on our e-voting system will be made available on the CCCJ website shortly.

Finally, CCCJ president emeritus, Mr. Eric DeGroot and Ron Haigh, corporate member representative for Toyota, spoke to members about recent efforts of several concerned CCCJ members, working with the Economic and Social Policy committee, in penning a pan-Asian chamber open letter which aims to raise awareness in the media and amongst the politicians of the need to restore full voting rights to all Canadian citizens, regardless of length of residency outside Canada. This letter was recently published in The Canadian Press, and The Globe and Mail.

On behalf of the CCCJ’s Board of Governors and office, the Chamber would like to thank all members who joined the 2015 Annual General Meeting.