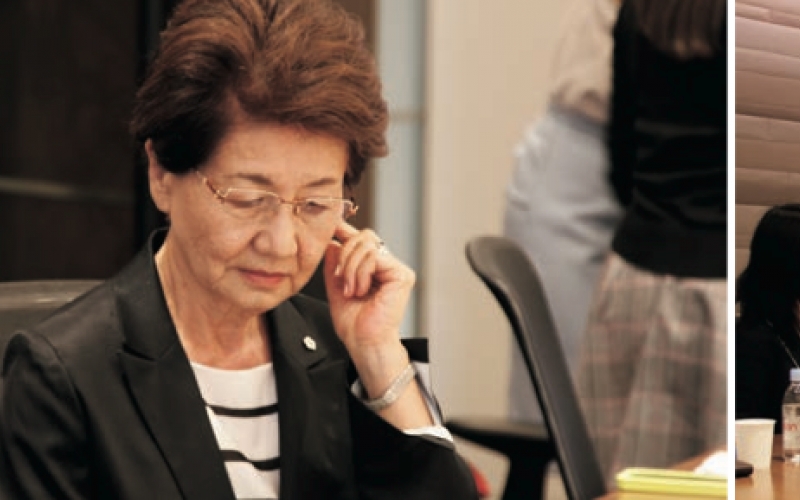 Akiko Kosuda, member of the CCCJ’s Honorary Board of Advisors and a senior advisor to the Japan PFI/PPP association, hosted the McGill MBA Japan Gender Diversity Roundtable at TMI Associates, Roppongi Hills on June 23rd. At the event, several members from the CCCJ’s business community and greater international chamber network participated in a discussion on the challenges of gender diversity in the Japanese and global corporate worlds.

STILL A MAN’S WORLD
Suzanne Lang, the director of food and beverage for the Roppongi Hills Club, took the podium first that evening. “Before coming to Japan, I worked in Dubai for seven years. Upon moving here, I was constantly asked: ‘Didn’t you have problems as a woman working in Dubai?’ But as long as I’ve been here, I’ve felt it was easier to live and have a career in Dubai,” she said. “I really felt as a woman you make a big step back [coming here].” As the first woman to ever be promoted to the position of food and beverage director in Tokyo, Lang observed that the hospitality scene here is still predominantly an “all boys club.” Unlike other countries where women are better represented, in Japan, they are often relegated to traditional “female” jobs. “In hotels all over [Tokyo] women are very successful in the front office, housekeeping or the spa; but in other fields of hospitality, they’re almost nonexistent.”

Yo Omoto, the regional medical liaison at Amgen Astellas BioPharma, agreed. “The doctors I deal with are men. I don’t have any female [counterparts], only male. I do hope to see a change.” Even at Uniqlo operator Fast Retailing, a company where women outnumber men, they are still underrepresented in management-level positions. However, Younghee Seo, the company’s corporate public relations manager, said its president is committed to “increasing the number of women in management positions,” which is a major step towards building a better balance of women in the workforce.

MENTORING PROGRAMS
Years ago, when working as Tokyo human resources director for a very large American company, Kosuda said she used “external pressure to change the CEO’s mind.” Noticing the low percentage of women in management, she wrote a proposal aimed at promoting female employees. “The CEO declined, stating [it] was unfair to men, that the company should treat them equally. That’s when I decided to invite the senior vice-president of diversity and inclusion from our U.S. head office to come and talk to him.”

For Monica Merz, the president of Toys “R” Us Asia Pacific, giving women “encouragement that they can go on maternity leave and come back” is paramount to attracting and retaining talent. “In Canada, we had many women who were in management positions leave for not just one, but a number of maternity leaves. [For example], one of our very senior people right now left [twice] and each time came back to the same job and was eventually promoted; she's prorably in that sort of second level underneath the president." Another woman was promoted before her leave she gave birth as an incentive for her to return. In both cases, Merz said, "We had a position available and we left [they] had the capabilities so we promoted [them]."

While such programs are effective, Omoto stressed that they should be offered early in the employee's careers. "The motivation to be there, get pomoted and [stick with] the company is created right at the beginning when you start working."

GENDER BIAS & EXPECTATIONS
When she joined Lixil, Chiaki Hashiba said she was the only female engineer and so for months she had nothing to do and quickly lost interest. Then, she joined the marketing department for a year. “I called the customers to try and understand the company better.” Step by step, she climbed up the ladder and was eventually promoted to senior manager. “I listen to customers,” she said. “I know what they want and so I can do product planning and achieve success.”

According to Noriko Ishida, assistant director of the McGill MBA program, customer expectations can also impede a woman’s career advancement. Despite her previous company’s attempt to put more women into management positions, “it wasn’t well received by the clients because they wanted a male buchou (director) or kachou (section chief ), not a female one,” she said. Ishida, who used to be a kakarichou (chief clerk), recounted that whenever customers saw that title on her business card, they always asked her: “So, who’s your kachou?” That was fifteen years ago. “But it’s still old fashioned,” she added.

FLEXIBLE WORKING CONDITIONS FOR EVERYONE
Miki Tomoeda, who worked in a male-dominated environment at a business consulting company for 12 years before venturing out on her own, said she provided flexible working conditions “not just for [herself ], but for her team as well.” “Flextime doesn’t just benefit women,” Tomoeda pointed out. For those employees who must remain connected 24–7, working from home can help bridge the gap. Also, people can enjoy spending more time outside their workplace, have some time with their families, for hobbies... whatever,” she added.

Another practice that works well, according to Omoto, is to have “childcare facilities right at the site.” Couples can conveniently drop off and pick up their children before and after work, thus reducing traveling time, lowering stress levels and, ultimately, increasing productivity. “Managing time and expectations [...] creates a better environment, not just for your team, but for the clients and the company,” concluded Tomoeda. “Trouble is: we talk about efficiencies, we talk about best practices, but if we don’t follow it ourselves, it just doesn’t stick.” One thing all who presented at the seminar agree on: it’s time for Japanese companies to adopt more measures to ensure that more employees — men and women, married or single — take their allotted personal, parental and sick leaves. Only then can a real change in corporate behaviour actually ensue.