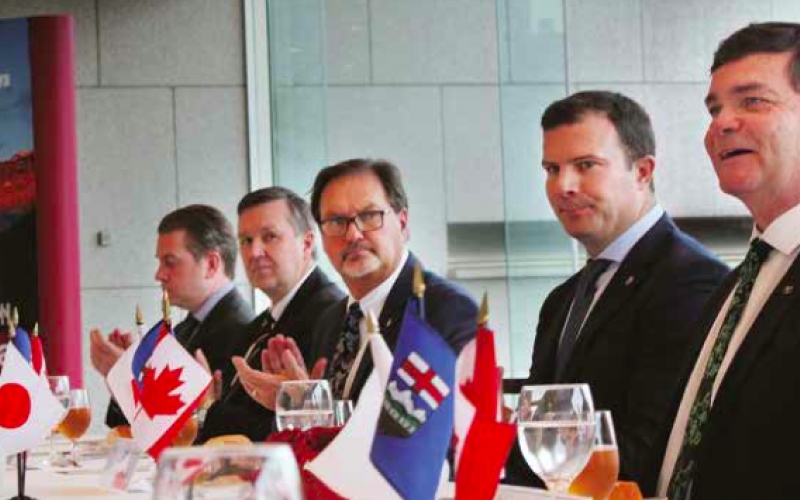 Hon. Oneil Carlier is a member of the Legislative Assembly of Alberta and is currently Minister of Agriculture and Minister of Forestry in the Alberta Cabinet.

Alberta’s Minister of Agriculture and Forestry Oneil Carlier arrived in Japan on Nov. 22 for six days of trade promotion and cultural bridge-building that took him up and down the country—from Tokyo’s halls of commerce to Alberta’s “sister province” of Hokkaido.

On the business side, Carlier brought with him representatives of the Alberta Forest Products Association and Sunterra Group, “business leaders in our agriculture and forestry industries,” he told The Canadian in an email interview. “A number of in-country branches of forestry product companies are also participating, such as Weyerhaeuser, West Fraser and Interex.” He added: “We are also meeting with key food product retailers and are profiling Alberta food products.”

Carlier’s mission was the Alberta government’s first to Japan since the provincial NDP swept to a majority just months ago on May 5—a gesture that speaks volumes about Japan’s importance to Alberta exports. That the first minister from the new government to make the trip to Japan represents agriculture and forestry also suggests, perhaps, something about the shifting sands of the Alberta economy in this era of rock-bottom oil prices.

Alberta unquestionably plays an essential role in Canadian trade with Japan. According to the Library of Parliament Canada-Japan Trade and Investment report, in 2014 Alberta accounted for 16 per cent of Canada’s exports to this country. A great deal of that, however, was energy, and Carlier’s visit coincides with what we might call, with typical Canadian understatement, “unfavorable market conditions.”
In May 2015—the same month the NDP won their majority—Export Development Canada (EDC) released a gloomy forecast for Alberta’s oil and gas sector, predicting price drops would take a 17 per cent bite out of the province’s total export earnings in 2015.

“This will be a difficult year for Alberta exports, but there is light at the end of the tunnel,” EDC chief economist Peter Hall told the Financial Post on the heels of the release— though the light still looks some distance away. The EDC's Commodity Tracker report for Dec. 7 showed year-on-year price declines in all nine energy sector categories listed, with five continuing to trend downwards, including oil and natural gas. World oil prices have continued to sag, hovering around US$37.07 a barrel as of Dec. 16.

Carlier’s visit to Japan, however, demonstrated that Alberta’s economy is no one-trick pony. The list of the province’s main exports to Japan is dominated by energy, agri-food and forestry products—two of which fall under Carlier’s brief. Diversification is the name of the game, though the minister was keen to point out that he was in Japan building on an already strong foundation. “In 2014, Alberta exported $9.7 billion in agri-food products with Japan as the third largest destination,” at $1.2 billion, he pointed out, adding that total exports of major forest products was also a robust $290 million in 2014. “This mission allowed us to identify opportunities to further grow these ties for mutual benefit. Japan will continue to be a high-priority market for Alberta’s agriculture and forestry products,” he told The Canadian.

The minister’s visit was not, however, all business. He made it a priority to head to Hokkaido to celebrate Alberta’s 35-year sister relationship with the Japanese prefecture. There, he attended the opening of an exhibition featuring 35 photos of both countries to mark the anniversary. Carlier also pointed out the rich history of exchange between Hokkaido and Alberta, including joint plant studies, sharing museum exhibits and research, plus student exchange programs.

Carlier also noted that he believes Alberta’s “relationship with Hokkaido has opened doors for exploring opportunities in a number of markets over the years.” The minister ended on a note of encouragement for the CCCJ and its sister chambers across the world, saying, “The Chambers are another avenue for promoting our industries and our products as well as building awareness of the opportunities we can explore with other markets globally.”

In other words: good work everyone. Let’s help build on what Carlier called the “many successes between our countries,” both of which have “benefited and prospered from our relationship.”