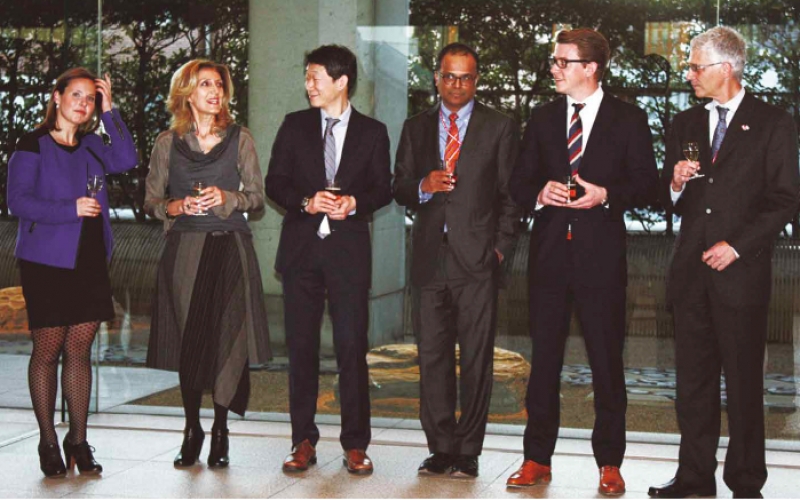 By Ron Haigh, chairman of the Canadian Chamber of Commerce in Japan and Toyota Motors project manager for the Americas group

As the global energy market faces a dramatic downturn and new government policies are put in place to substantially cut greenhouse gas (ghg) emissions, Japan faces renewed uncertainty regarding its future energy mix and Canada has a further impetus to diversify its economy. At present, global energy opportunities represent about 10 per cent of Canada’s gdp and Canadians, at current rates of production, are sitting on a 120-year oil supply and a 300-year natural gas supply. But perhaps common adversity forges the best partnerships. Natural resources remain an export priority in Canada and Japan is a logical partner. In the short term, however, resource production will need to be offset by greater efficiency provided by advanced technologies. Fortunately, Canada and Japan are both world-class energy innovators. And we must not lose sight of the long-term: global energy demand is expected to increase by close to 40 percent by 2040.

It is against this challenging background that the cccj hosted with the Embassy of Canada to Japan a seminar and networking event entitled “Canada’s Changing Energy Landscape” March 1. It was an undertaking impossible without our close partnership with the provinces of Alberta, British Columbia, Ontario and Quebec.

The seminar focused on federal and provincial policy developments, as well as new commercial opportunities in traditional and renewable energy in Canada. Each province was requested to deliver an overview of strategy within its own jurisdiction. Alberta, possessing 80 per cent of Canada’s oil and 70 per cent of its natural gas, made a compelling case for why partnerships with Japanese companies were essential to viable development of these resources. British Columbia explained how it was making major investments in infrastructure to keep local electricity rates stable and position itself as a major energy
exporter to Asia and a North American climate leader. Ontario outlined how its making impressive progress on its ghg targets through energy diversification under its 2050 Vision. Finally, Quebec shared its approach to making energy the driving force for prosperity through a 2016-2025 New Energy Policy that targets innovation, sustainability, abundance and affordability.

What made the seminar especially relevant was a series of breakout sessions in which twenty-one of Canada’s leading clean technology companies and industry associations were on hand to present their expertise and exchange information. The seminar clearly demonstrated that these key players had versatile, mature technologies and services in oil and gas, solar, thermal, wind and hydrogen energy.

Regarding the traditional energy sector, there has been much hand-wringing about getting resources to market through the five major oil pipeline projects proposed, but Prime Minister Trudeau has stated in the recent Vancouver Communiqué of Canada’s First Ministers, “We agreed on the importance and urgency of moving Canada’s resources to market in responsible, timely, predictable and sustainable ways within existing jurisdictional frameworks.” This tension between reaching energy sustainability and expanding natural resource exports can only be resolved through better technologies. And therein lies tremendous business opportunities for Canadian and Japanese companies.

As the seminar highlighted, Canada has the third largest renewab le energy capacity and boasts one of the cleanest electricity systems in the world. 75 per cent of its electricity supply emits no ghg and the Canadian government has a target of 90 per cent by 2020. Canadian cities are positioning themselves to efficiently use that energy with over 60 Smart Grid initiatives underway and, through Mission Innovation, the Canadian Federal government pledged at cop21 to double investment in clean energy innovation over the next five years.

Where will the money go? We know that C$100 million annually will be invested on green producers to support emerging clean technology manufacturers and for exporting clean technologies. This is smart because export is a big part of the game. Close to 70 per cent of clean technology firms export, with over half of total revenues generated outside of Canada.

Another $200 million annually will be spent for innovation and use of clean technologies in the natural resource sectors. Already, Canada is home to three of the world’s 15 operational large scale ccs projects. And more broadly, Canadian companies are pioneers in hydrogen-related research and have brought to market quicker and in greater volume a variety of novel technologies in fuel-cell, solar and wind energy.

The Investment, Energy, Natural Resources and Advanced Manufacturing section of the Canadian Embassy to Japan is headed by Senior Trade Commissioner Andrea Clements. Right at the start of the seminar she put concerns about the future of the energy business in proper perspective: The clean energy sector is growing four times faster than any other sector of the Canadian economy. This is good news for both Canadian and Japanese companies who are seeking to expand business and forge new partnerships.