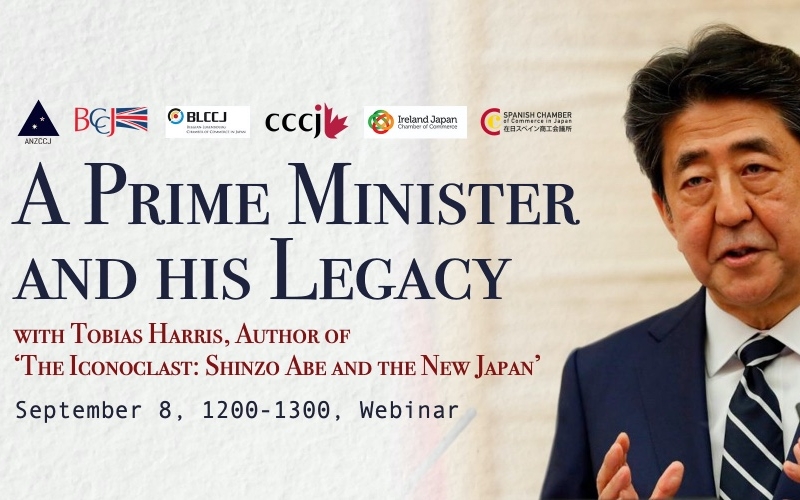 Japan will soon have a new Prime Minister following Mr Abe’s record breaking stint in office. Mr Abe won three Lower House elections and became a familiar figure internationally – in itself, an unusual achievement for a Japanese Prime Minister. His Abenomics programme and the Three Arrows promised much – but what did they really achieve and how will history judge this interesting figure? And what happens next – where do his successors propose to lead Japan?

Note: A ZOOM access link will be sent to participants 1-hour before this webinar is scheduled to start.

This is a joint chamber event with the BCCJ. Our guest speaker will be Tobias Harris, Executive Vice President and Japan analyst in Washington, DC, for Teneo Intelligence. His biography ‘The Iconoclast: Shinzo Abe and the New Japan‘ was published by Hurst on August 27th and has been very well received.

He is an expert on Japanese politics, and worked in 2006-2007 on the staff of Keiichiro Asao, at that time a member of the upper house of the Japanese Diet and shadow foreign minister for the Democratic Party of Japan, for whom he conducted research on foreign policy and Japan’s relations with the United States. He is also the Fellow for Economy, Trade, and Business at Sasakawa Peace Foundation USA.

Tobias’ review will be followed by an open Q&A facilitated by Melanie Brock, CEO of Melanie Brock Advisory and one of Japan’s best known APAC specialists. Melanie Brock uniquely combines language skills, high level political, media and business networks, and practical commercial business leadership. She consistently delivers on business, regulatory and partnership outcomes for Japanese and Australian corporations in both a global and domestic context.

Highlights of Melanie Brock’s 20 year plus experience include leading nationwide marketing campaigns, successful bilateral free trade agreement and architect of regional Japan CSR activities. Melanie is currently engaged by several companies as a senior advisor including Tanarra, AIG, the Western Sydney & Aerotropolis Authority and several Japanese companies. She is on the board of Sega Sammy, has been a member of the Australia-Japan Research Centre Advisory Board since July 2019 and an Advance Global Ambassador since October 2019.