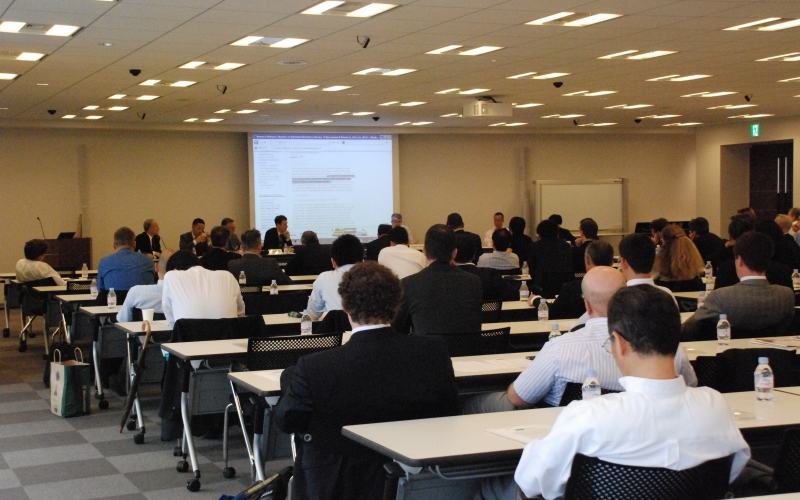 A presentation by the famous Professor Martin Hilb of the University of St. Gallen in Switzerland, followed by comments by Nobuyuki Hiraizumi, outside director at Kajima Corporation, and a panel discussion.

(Simultaneous Translation will be available)

Professor Hilb, a world famous professor and consultant in the field of corporate governance, will be visiting Japan in connection with the release of the Japanese version of his popular book “New Corporate Governance”. Japanese is the seventh language into which this book has been published.

On the occasion of his visit, The Board Director Training Institute of Japan (BDTI) will offer a free symposium on this very timely topic in collaboration with LexisNexis Japan and the Canadian Chamber of Commerce in Japan.

To a greater degree than ever before, the global financial crisis of 2008 demonstrated the extreme importance of effective corporate governance. It is now clear to all that we live in an age when the externalization of ever-larger risks by corporations poses serious challenges for mankind. At the same time, recent corporate scandals in Japan have once again dramatically exposed some of the unique governance issues that arise in Japan.

Debates about corporate governance in Japan often tend to focus on simplistic comparisons between the Anglo-American system and the Japanese system. Professor Hilb’s research has shown that such “either-or” thinking has many faults. Instead, he advises companies to use universal principles and proven “new corporate governance” methods that seek to optimally integrate the functions of the board and draw upon the superior features of various governance regimes. In his presentation, the Professor will first introduce these core concepts, while making recommendations for improving corporate governance in the post-financial crisis world, and commenting on the urgent issues that Japanese companies face in the years ahead.   .

Next, Professor Hilb will use “mini-case” (real-life) examples to demonstrate the “board management” techniques that are being used by successful Japanese and non-Japanese companies to improve decision-making and their “directing and controlling” functions. He will explain some of non-obvious roles that boards need to play in order to contribute to performance and sustainability. Based on his many years of consulting and research using his own techniques for board evaluation and director selection, Professor Hilb will give us not only academic perspectives, but also practical, real-world advice.

Following Professor Hilb’s presentation, Mr. Nobuyuki Hiraizumi (an outside director at Kajima Corporation), will comment on the Professor’s presentation, focusing on those aspects that are most relevant and valuable for Japanese companies to consider. An active panel discussion will follow. Joining our panel will be Professor Kenichi Osugi from Chuo University Law School and Nicholas Benes, Representative Director of The Board Director Training Institute of Japan.

Place:  Sanjo Conference Hall at The University of Tokyo

*The start time may be delayed slightly due to preparation simultaneous translation. In that event we will inform participants in advance.

Mr. Nobuyuki Hiraizumi presently serves as an external director to the global construction firm, Kajima Corporation, and as an Advisor to Avant Asssociates, an urban planning company in Tokyo. A graduate of Waseda University’s School of Commerce, he has broad experience in management and policy matters. He first entered the PHP Institute, and then moved to Kajima Corporation to work as a salary-man. In 1991 he received an MBA from the Darden School of Business at the University of Virginia and returned to Kajima to serve as an executive. Between 2005 and 2007 he was seconded to serve at the Ministry of Finance’s Policy Research Institute. He returned to Kajima, retired in 2009, and became an outside director at in 2012.

Professor Ahmadjian’s research interests include comparative corporate governance，globalization，systems of capitalism，business groups，and Japanese business and management, and she has published extensively on these topics. She teaches courses including Organizational Behavior, Corporate Governance, Business Research, Leadership, and Global Management. From 2010 to 2012, she served as Dean of the MBA program at Hitotsubashi University Graduate School of International Corporate Strategy (ICS). Before joining ICS in 2001, she was an assistant professor at Columbia Business School. Currently, she serves as a non-executive director at Eisai Co., Ltd. and at Mitsubishi Heavy Industries, Ltd. (MHI). Other work experience includes positions at Bain & Company and Mitsubishi Electric. Professor Ahmadjian is an American citizen and has lived in Japan for l7 years．She received an AB magna cum laude from Harvard University, an MBA from Stanford University Graduate School of Business, and a PhD in Organizational Behavior and Industrial Relations at the Haas School at the University of California at Berkeley．

Professor Osugi graduated from the Law Department of Tokyo University. After serving as Assistant Professor of Law at Tokyo Metropolitan University, he assumed his present position at Chuo University Law School. His principal areas of research include corporate governance, laws related to venture businesses, and restructuring/revitalization of distressed businesses. He is the co-author of ”The Frontline of Takeover Battles: Guidance for Hostile Takeover Defense,” “Cases and Materials on Company Law”’ (both in Japanese).  He is also a member of various study groups and committees, including METI’s Corporate Governance Study Group, and the M&A Study Group of the Cabinet Office’s Economic and Social Research Institute.

Mr. Benes received his B.A. in political science from Stanford University, and a JD-MBA degree from UCLA, after which he worked at JP Morgan for 11 years. He is an inactive member of the bar in California and New York, and is certified as a securities salesman in London and Japan. Currently, he is a Governor of the American Chamber of Commerce in Japan (ACCJ), where he also is Chair of the Growth Strategy Task Force and Vice Chair of the Labor Force Diversification Task Force.  In the past, he served as Chair of the FDI Task Force of the ACCJ, and as a member of the Experts Committee of the Japan Investment Council, an advisory committee to the Japanese Cabinet on FDI policy. He has also served as an independent outside director at Alps Mapping, the listed company Cecile Ltd., and Livedoor Holdings (post-scandal). In 2010, he was a member of the Financial Service Agency’s Corporate Governance Liaison Committee, which had been formed to provide private sector input to the Ministry of Justice and the Legal Affairs Advisory Council regarding amendment of Japan's Company Law.