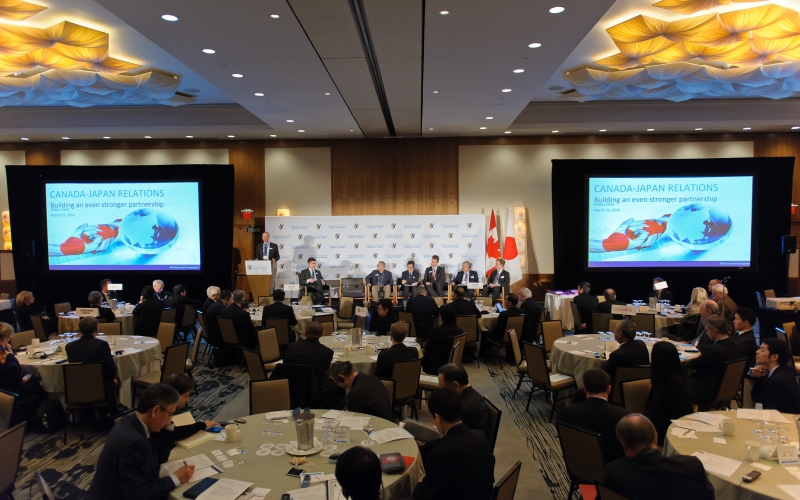 Relationship metaphors are common in international dealings. In Canada, we often refer to our American “best friends” or our European “cousins.” In the same vein, Japan and Canada are friendly acquaintances who, whenever they meet, realize that they have much in common. Yet despite the best of intentions, vague promises to get together more often never result in concrete plans, and the potential to be closer friends remains unfulfilled.

If ever there was a moment to take that next step to bring the Japan-Canada relationship closer, it’s now.

New trade agreements will go a long way toward removing the barriers that have hindered the free flow of goods and services between our nations.  Negotiations continue on the Canada-Japan Economic Partnership Agreement, while the Trans Pacific Partnership is on the verge of opening the doors to greater trade within the Asia-Pacific region.

After decades of low growth, the Japanese economy is turning a corner. As the world’s third largest market and a dominant player in regional supply chains, Japan is an essential part of Canada’s openness to Asia. Japan is Canada’s fourth largest export market and the largest Asian contributor of foreign direct investment.

Like all good friends, Canada and Japan complement each other well. Canada’s agriculture, fisheries, forest products and energy appeal to Japan’s need for natural resources, while Japan’s expertise in motor vehicles, electronics and machinery are much in demand in Canada. There is also room to grow exchanges of clean technology and services, as well as huge joint venture opportunities in both Asia and North America.

The best of intentions are simply not enough, however. Despite the obvious synergies between Canada and Japan, merchandise trade between the two countries has barely grown over the past decade. Both businesses and governments need to take steps to lay the foundation for the type of close partnership on economic and political matters that would benefit both our great nations.

That’s why the Japan-Canada Chambers Council (JCCC) is bringing together over two hundred business leaders, policymakers and diplomats for one of the most significant bilateral business events in over decade.

Launched in 2014, the JCCC is a platform to build relationships, share knowledge and advocate policies to support bilateral trade and investment. Its methods include joint events, delegations, research, public statements and meetings with policymakers. Housed in the Canadian Chamber of Commerce and the Japan Chamber of Commerce and Industry, the council includes senior executives from leading member companies in both groups. Leadership is provided by two national chairs: Shoei Utsuda, the global chairman of Mitsui & Co. (Japan) and Steve Dechka, former president and CEO of Canpotex (Canada).

The latest JCCC symposium took place last March 21 in Vancouver, British Columbia. Aptly entitled “Rekindling the Relationship,” the session focused on what both public and private sector leaders need to do to realize the tremendous potential of Canada-Japan trade.

The program drew on the insights of leaders from key industries like automotive (Honda), transportation (Port Metro Vancouver), entertainment (Capcom and Rainmaker studios), and high-tech (Hitachi High Tech). Each participant shared their perspectives on the biggest bilateral opportunities, as well as the barriers that are holding back trade and investment.

Another session focused on the issue of investing in Japan’s regions. Japan is often seen as a difficult place for Canadian firms to invest. Companies have trouble navigating the rules and finding local partners to work with, and those who succeed tend to stay close to Tokyo. But things are changing. Governments at all levels are reforming the tax system and improving the business climate to attract new international investors.

Of course, relationships between countries, just like relationships between people, are not based on economics alone. The experiences of real people—including tourists and students—as well as cultural exchanges are crucial to how Canadian and Japanese people perceive each other. British Columbia’s Minister of Trade, Theresa Wat, and former Ambassador to Japan Joseph Caron participated in a discussion exploring these essential connections.

The next symposium will take place in Japan in 2017. In the meantime, the JCCC will continue to allow Canadian and Japanese businesses to build connections, as well as to raise the importance of a closer Japan-Canada relationship with governments.

Japan and Canada’s friendly relationship often gets taken for granted. With initiatives like the JCCC, we hope to ensure that this friendship gets the attention it deserves.

Canada and Japan have products and technologies that the other needs: from energy and infrastructure to agri-food and life sciences. But bilateral trade and investment has barely grown for decades. Where are the biggest opportunities and what's holding us back? What can the TPP and other initiatives do to turn things around?

Japan is often seen as a difficult place for Canadian firms to invest. They have trouble navigating the rules and finding local partners to work with. And those who succeed tend to stay close to Tokyo. But things are changing. Governments at all levels are reforming the tax system and improving the business climate to attract new international investors. What's the status of these reforms? What kind of support is available to Canadian companies entering the market?

Trade and investment doesn't grow in a vacuum. It needs to be supported by broader people-to-people ties. Canada and Japan have a lot to learn about each other and that takes effort. How can we increase academic and professional exchanges? Boost bilateral tourism? What sort of partnerships are needed to do that?