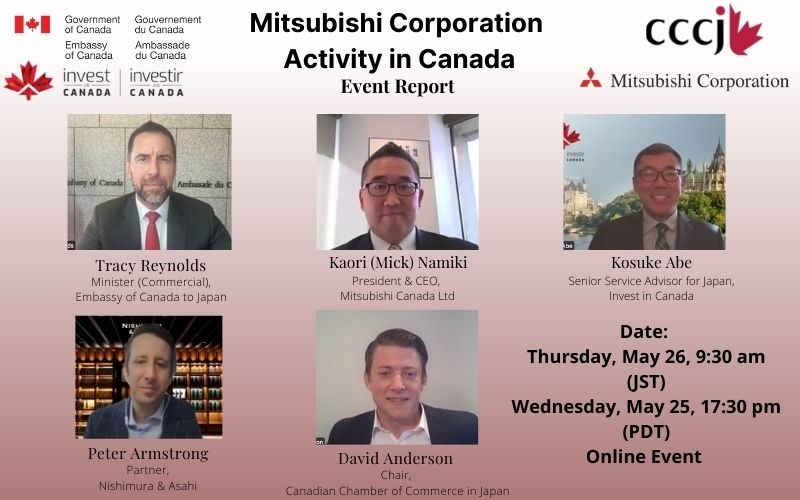 On May 26th, more than 70 CCCJ and JCCC members participated in the Mitsubishi Corporation—Activity in Canada event online, with presentations led by Kaori Namiki, Kosuke Abe, Peter Armstrong, and Tracy Reynolds. The seminar began with a welcome remark by David Anderson, Chairman of the CCCJ, stating his goals during his term.

Tracy Reynolds, Minister (Commercial), Embassy of Canada to Japan, presented opening remarks and briefly discussed the ongoing trade and investment relationship between Canada and Japan. Some of Canada’s top exports to Japan include energy, minerals, and agricultural products to further support Japan’s energy, resource, and food security. With the Canadian government seeking a ‘net-zero’ goal, Japanese companies are contributing to a green economy through partnerships and investments.

Kaori Namiki, President and Chief Executive Officer, Mitsubishi Canada Ltd. (Japan) has announced that Mitsubishi is on a ‘Roadmap to a Carbon Neutral Society’, with three core points. 1. Greenhouse gas emissions halved by 2030 through fuel switching, with net-zero greenhouse gas emissions by 2050. 2. $20 billion (CAD) of energy transformation (EX) related investment by 2030. 3. Integrated EX/DX initiative to “Create a New Future”. Continuing in the topic of climate change, Mitsubishi plans to invest $100 million (USD) in Breakthrough Energy Catalyst (BEC) to reduce its carbon footprint in order to preserve our quality of life. Other current investments include Shale Gas Production, LNG Development, Iron Ore Mining and Processing, Blue Ammonial/Blue Hydrogen/CCS Project, Salmon Farming, and more. The two main trading businesses from Canada to Japan include Wood Pellet Export and Natural Gas (LPG). Mitsubishi Corporation also introduces their investment and funding in the innovation field for Space Labs, McRock Capital, and Mission from MaRS. During the Q&A session, Namiki-san stated the importance of finding reliable partners to work with, as building a trusting relationship is the key to success.

Kosuke Abe, Senior Service Advisor for Japan, Invest in Canada, introduces the company by saying that their main mandate is to promote foreign direct investment in Canada and to facilitate that investment. Invest in Canada has four programs to support investments, including: Support for Innovation, Strategic Innovation Fund (SIF), Progressive Tax Incentives, and Global Skills Strategy. Recent investment announcements cover automobile and commercial vehicle sectors such Ford, Honda, GM, and Stellantis. Upcoming events for the month of June include PPAC 2022, Collision 2022, and JETRO Seminar+Japan Night, which will take place in Toronto. The Q&A session led to Abesan discussing the trends with financial cost and how covid has forced some companies to change their mandate and work around their problems.

Peter Armstrong, Partner, Nishimura & Asahi, served as our moderator for today’s event, and started our discussion by showing an appreciation for the relationship between Canada and Japan based on their trade and investments.

The CCCJ would like to give our thanks to: Kaori Namiki, Kosuke Abe and Tracy Reynolds for their insight to trade and investment, Peter Armstrong for moderating this session, and to all the participants who joined this event. We look forward to future opportunities to further discuss the business relationship between Canadian and Japanese businesses.