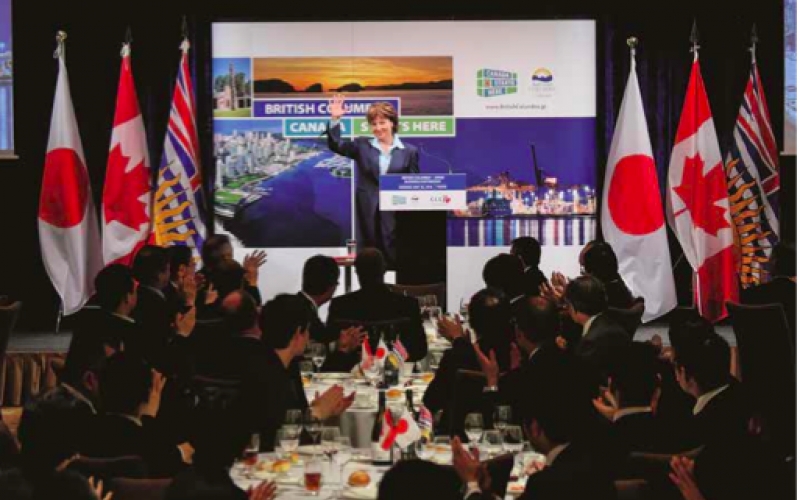 A CCCJ-backed luncheon on May 30 headlined by British Columbia Premier Christy Clark was all about trans-Pacific relationships—from the personal variety to the macro-economic.
CCCJ Chairman Ron Haigh kicked off the theme in his opening remarks, hailing the packed event of over 200 guests as a “great opportunity for conversation with important stakeholders in the Japan-B.C. relationship.” Premier Clark then took to the podium to emphasize to the audience of Japanese and Canadian business leaders and officials at the luncheon sponsored by the Vancouver Fraser Port Authority how deep and important British Columbia’s relationship is with Asia overall, and Japan in particular.

British Columbia, which sends nearly 50 per cent of its exports to Asia, has “been purposeful in making friends and creating new relationships across the Pacific, because we understand that this is where the future of the world economy sits,” she said. She went on to credit her province’s economic health—a growth rate double the Canadian average, the lowest unemployment rate in the country, a stable AAA credit rating and four annual budget surpluses— to this Asia-focused trade relationship, plus fiscal discipline.

Premier Clark then looked back on the postwar Japan-British Columbia relationship built on the “bedrock” of the province’s natural resources, saying that “for over 30 years, Japanese companies have played a crucial role in building British Columbia’s exploration for mining projects; projects that build communities and that keep people working.” However, she noted the need to grab new opportunities when they appear, and with the province’s economy in robust condition, “we are at a moment where British Columbia has opportunities before it to work together with Japan as never before.”

During a 2013 Asian trade mission that made its final stop in Tokyo, Premier Clark focused heavily on liquefied natural gas (LNG) development opportunities, and LNG remained an important pillar of her address this time. She acknowledged that current market conditions have slowed that development, but “we cannot be distracted by what’s happening today. If Japan teaches the world anything, it is that visionary, long-term thinking is what pays the bills for our future.” She added that in that future, “demand for clean energy is only going to increase in Japan, and also for your neighbours in Asia.” The premier highlighted that natural gas is the cleanest of all the non-renewable energy sources, but also mentioned that the British Columbia forestry sector is a leader in developing renewable biofuels. “B.C. has what Japan needs in order to grow, and in order to grow sustainably,” she said.

However, Clark was also keen to point out that there is more to B.C. than trees and mineral wealth, that it is quickly becoming a high-tech centre with plenty of charm points for the Japanese investor: access to the NAFTA zone, a culture of innovation and the lowest combined corporate taxes in North America as well as among the lowest personal taxes.

She reserved some of her last comments for relationships writ large, saying, “I hope very much that our two countries will continue to grow [their] relationship by making sure that we confirm the Trans-Pacific Partnership, which is so vitally important for Canada to grow, as well as the Canada-Japan economic partner[ship] agreement.” Premier Clark left the audience with hopeful and ambitious words for the future of the long and fruitful
ties between her province and Japan. “Japan and British Columbia have to work together to make sure that we change the future,” she declared. “Our greatest resource is people in both of our countries... And the future is transformed by people, because we build relationships.”