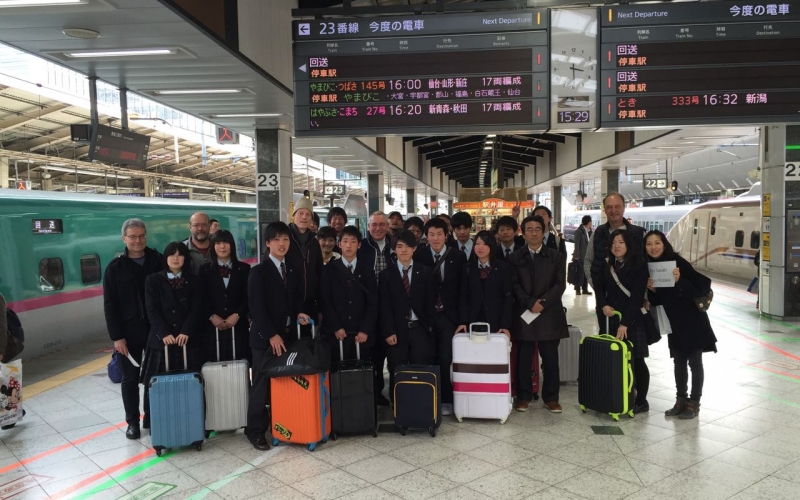 The 2016 Tohoku Internship Program is in full swing with 13 students at internships with different companies from and related to the CCCJ’s membership. Students arrived at Tokyo station on Sunday the 13th and have been at their internships since Monday.

On Friday evening, the CCCJ will host a casual reception to celebrate the completion of the program at the Whistler Café. At the event, all program participants will make brief presentations about their Tokyo intern and homestay experience. Over the weekend, students will enjoy a free day with their host families on Saturday and then depart for Tohoku from Tokyo Station on Sunday the 20th.

The Tohoku Intern Project is a meaningful way to give the young people from Rikuzentakata - one of the areas hardest hit by the 3/11/2011 Earthquake and Tsunami - a chance to have exposure to new experiences and different people. The CCCJ would like to extend an extra special thank you to host companies, volunteers, homestay families and sponsors for their hospitality and generous support of this program.

Rikuzentakata, is a small city located on the Sanriku Coastline between Kesenuma and Ofunato in Iwate Prefecture, that was devistated by the Great East Japan Earthquake and its ensuing Tsunami. Despite the fact that the town, is, essentially gone, as described by it's Mayor, people of Rikuzentakata are hopeful, and are committed to recovery.

A Message from Futoshi Toba, Mayor of Rikuzentakata in Iwate Prefecture

In summer 2012, Neil van Wouw and the CCCJ's CSR committee went to Rikuzentakata to discuss the idea of inviting high school students. The idea was met with great enthusiasm and since then, in 2013, 2014 and 2015, the program materialized in internships and homestays for 11, 14 and 15 students respectively.