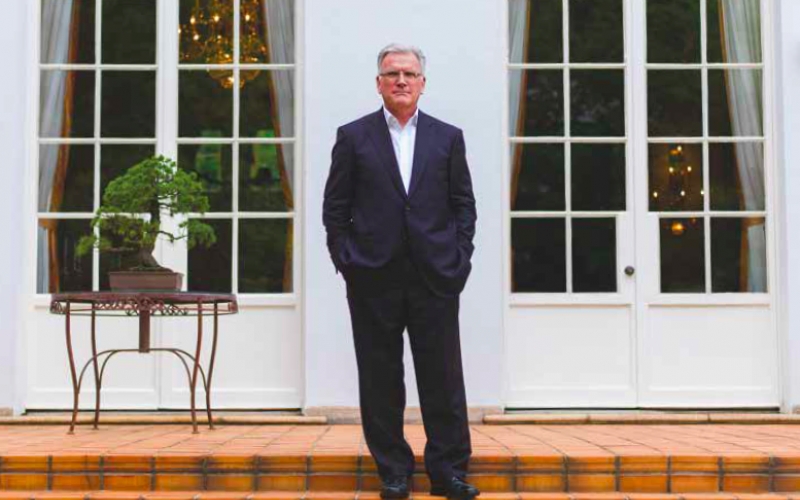 AS HE MOVES ON TO NEW CHALLENGES, THE CANADIAN AMBASSADOR DISCUSSES DIPLOMACY AND TRADE RELATIONS

The Ambassador of Canada to Japan Mackenzie Clugston, will be leaving the foreign service after serving five key posts at the Canadian missions in Tokyo and Osaka in a diplomatic career that began when he joined the Department of Foreign Affairs and International Trade in 1982. The ambassador, who was born in Kobe and is fluent in Japanese, plans to reside in Kansai area for the foreseeable future.

What do you feel was the most challenging (and satisfying) assignment as the Canadian Ambassador to Japan?

Ambassador Clugston:I would have to say it was the work that went into advancing trade negotiations between Canada and Japan. When I arrived in late 2012, the Canada-Japan economic partnership agreement (EPA) negotiations were underway. Roughly six months later, we began engaging on the Trans-Pacific Partnership (TPP) at a time when both countries decided it was in their interest to join. The TPP is by far the largest deal in play, but the entry negotiations were very tough between our two countries—particularly regarding the auto sector. While we were all waiting for the TPP to be completed and ratified, the Australians successfully completed their EPA with Japan. Consequently, the Australians have enjoyed an advantage that has allowed them to make inroads in many sectors of importance to Canada. Despite the current deadlock on the TPP in the U.S., or perhaps because of it, there are ample reasons to push forward with a Canada-Japan EPA.

I don’t believe that Japan yet sees the strategic merit of concluding an EPA with Canada in the absence of the TPP. But, there can be little doubt an EPA with Canada that encompasses energy as well as food security issues could be an enormous boost to the bilateral economic relationship while serving as an important incentive to the U.S. to compete the TPP. An EPA with Australia may not turn many heads in Congress, but a Japanese EPA with Canada—which touches on areas of mutual interest to the U.S.—would be an enormous wake-up call for them.

What was your most memorable meeting with a foreign dignitary in your role as ambassador?

MC: In the lead up to various discussions between prime ministers Shinzo Abeand Stephen Harper during Harper’s visit to Japan, I had the opportunity to interact with Chief Cabinet Secretary Yoshihide Suga. It’s rare to meet someone quite as cool and shrewd asSuga, who appears capable of managing different issues and players almost as if it was a complex game of chess. The chief cabinet secretary is, in my view, a very impressive individual and one of the keys to the success of the Japanese government in the past four years.

What was it like to meet the Emperor of Japan and what are your impressions of the Imperial Family and their continuing legacy? Do they have any connections to Canada and Canadians?

MC: To meet the emperor is to come face to face with more than 1,600 years of history. In the presence of Their Imperial Highnesses, you feel a wonderful sense of spiritual calm. He has an unusual ability to focus on the person with whom he is speaking, and to leave the distinct impression that he really cares. There’s an innate goodness and sympathy that shines through the emperor and empresses personalities. While above politics, nonetheless he’s prepared to express his views on profound issues that affect Japan, such as the current debate surrounding Japan’s constitution. I believe that side of him is very much appreciated by most Japanese.

There are many connections to Canada for the Imperial Family. For example, Prince Takamado, a first cousin of Emperor Akihito, studied at Queen’s University from 1978-81. Also, Princess Ayako, daughter of Prince Takamado, studied at Camosun College and later at the University of British Columbia. Further, Princess Takamado is patron of The Canada-Japan Society. In fact, the connections with Canada go back quite far. In 1953, Crown Prince Akihito on route to attend Queen Elizabeth’s coronation, spent his first night overseas sleeping in Victoria as travel by boat was the preferred way to travel at that time. Canada is fortunate to have such links with the Imperial Family.

What do you hope to be the defining legacy of your term as Canada’s ambassador to Japan?

MC: Over my five different assignments [see sidebar], a key focus has been on strengthening bilateral trade ties by working on areas of
common interest, such as housing, food products and education. An excellent example are the advances that the embassy, in concert with the private sector, has achieved since the 1970s to open up the Japanese housing market to Canadian wood. In Japanese government circles, there was a misconception that wood wasn’t a safe building material. This perception had been shaped— fairly enough—by the large urban conflagrations that Japanese cities suffered on a regular basis over the centuries. Through a long process of discussion, demonstration and sheer effort, Canada was successful in nudging forward the evolution of Japanese building codes to recognize that wood products are comparatively inexpensive, provide superior structural resistance to earthquakes and have excellent fire-retardant qualities. Canada literally built a housing industry in Japan and greatly changed the traditional Japanese wooden house for the better. I’m proud to have been a part of that particular effort.

MC: One of the key problems is that Canada has no regular reporters in Japan and Japan no reporters stationed in Canada. As a result, we’re seeing each other through others’ eyes. This is a problem.

There’s a persistent cliché in Japan that Canada is a cold country of great natural beauty. While that may be true to some degree, it simply doesn’t capture the reality that Canada is a modern, technologically advanced country (with one of the highest standards of living in the world), capable of making things like the Canadaarm2 for the International Space Station or Bombardier aircraft. Canada’s rich ethnic and cultural diversity, a source of strength to the country, is also something that some Japanese people have a hard time understanding.
This may be because they have been schooled to think that ethnic and cultural homogeneity are key underpinnings to a harmonious society.

As for Canadian misconceptions about Japan, the 2011 earthquake created an enormous amount of sympathy for Japan in Canada and respect for the quiet dignity, perseverance and mutual cooperation with which the Japanese coped with this disaster. This was a breakthrough in terms of perceptions of Japan. However, the stereotypes of Kyoto, geisha, advanced technology and anime still dominate the perception of Canadians with respect to Japan. This is rapidly changing, however, with the growth in Canadian tourism to Japan, up 26 per cent to over 230,000 visitors in 2015. One of the other keys to breaking down misconceptions or stereotypes will be reforming the
curricula of our education systems so that we learn some important fundamentals about each other.

How many meishi, or business cards, do you think you have given out during your time as ambassador?

MC: Easily 5,000 over the last three years. I’veretained more than 1,800 after sorting through a great deal more. It’s a challenge to remember everyone you meet, but I review the cards I receive and try to match the name to photographs of the individuals. I also try to use unusual kanji in people’s names by which to remember them.

What do you think it would have been like being the Canadian ambassador to Japan in Herbert Marler’s time [see “Retrography,” p.35]?

MC: To have been in Japan in the 1930s would have been fascinating. The early Showa period was a time in which the country was making the transition from a struggling democracy to a military dictatorship, and the pressures within the political and military classes must have been enormous.

I feel that now is also an interesting and important time for Japan. It has emerged out of the super growth period and is now facing big decisions about what kind of society it will become in the face of serious challenges such as an ageing and declining population, globalization and the environment.

What would you say is the most unusual official event you have been asked to attend in Japan in your capacity as Canadian ambassador?

MC: There haven’t really been that many unusual or surprising events. I consider carefully what I participate in, understanding that in Japan maintaining reserve and decorum are important for any senior position. One of my first priorities is to uphold the dignity of the office of the ambassador. That is why I would be very hesitant to take part in certain TV shows, for example.

What do you see as Japan’s primary challenge going forward?

MC: Post-war Japan has evolved into an egalitarian society that is both wealthy and possessed of advanced social benefits. However, we’re seeing the stresses imposed on this model by rising national debt, the emergence of greater income inequality and a rapidly ageing population. Most Japanese recognize that this is not sustainable, but the choices going forward will be hard. Japan is also a bureaucratically bound country, and certain sectors—such as banking—are over-regulated. Many observers have been hoping that Prime Minister Abe’s “third arrow” reforms would be well underway by now, opening up the economy to change, but such is not the case.

How did you evaluate Prime Minister’s Trudeau’s first official trip to Japan?

MC: I was very pleased with the recent trip of the prime minister. He sent a strong message to Japan that this is a country of primary importance to Canada. He’s been able to create a strong relationship with Prime Minister Abe and I suspect that relationship will become the foundation for greater collaboration between Canada and Japan in the coming years. On a personal level, it’s clear that he’s fascinated by the country, its cuisine and its culture. The new Canadian ambassador will be arriving at a good time—and doubtless able to take this relationship to a new level.